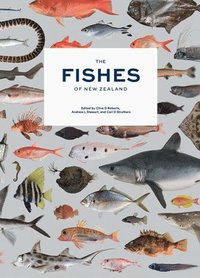 Fishes of New Zealand, The

av Clive Roberts
Inbunden Engelska, 2015-11-12
2689
Köp
Spara som favorit
Skickas inom 5-8 vardagar.
Fri frakt inom Sverige för privatpersoner.
Explore, discover and identify every known species of New Zealand fish in this encyclopaedic and beautifully illustrated guide. The Fishes of New Zealand represents the culmination of decades of collecting and taxonomic research by scientists based at New Zealand's national museum, Te Papa, in collaboration with specialists worldwide. It reveals the history, diversity, and biogeography of the region's rich freshwater and ocean life across New Zealand's vast aquatic environments. Comprising thorough and accessible descriptions of each of the more than 1250 species found in New Zealand waters, this essential four-volume book introduces many newly discovered and identified specimens, and over 140 species new to the area. Each species features diagnostic, taxonomic, distribution and biological detail, accompanied by richly produced photographs, maps, and illustrations. This landmark publication is an indispensable reference for researchers, conservationists, professional and recreational fishers, and anyone interested in the unique aquatic biodiversity of Aotearoa New Zealand.
Visa hela texten

The fish ID book to end all fish ID books ... this work is the ultimate assembly of current knowledge of New Zealand fishes and is easily accessible to the educated layman ... I thought I knew a bit about our fishes, but a leaf through the volumes quickly convinced me I had only ever scratched the very surface of the subject ... A phenomenal effort! -- Sam Mossman -- New Zealand Fishing News Twenty years in the making, The Fishes of New Zealand is a big, scholarly work that will also have huge public appeal for everyone who is passionate about fishing or just curious about the natural world. -- Alison Ballance, Our Changing World, Radio New Zealand Clive Roberts, Andrew Stewart and Carl Struthers have done an extraordinary job in collating so much material ... a Christmas gift that will last a lifetime. -- Tim Pankhurst, Seafood NZ Whether you live in Australia or New Zealand, for insights into the species you'd like to catch, or to feed your fascination for the marine world and its diverse plethora of fish species, this is a fish reference without equal. Featuring four hard-cover volumes presented in a beautiful slipcase, this amazing masterwork really is a pleasure to behold. -- BlueWater magazine

Dr Clive Roberts has been Curator of Fishes and leader of the fish team at the National Museum and Museum of New Zealand Te Papa Tongarewa since 1992. Clive is an experienced field worker who has led numerous expeditions sampling New Zealand fish faunas, with teams of scientists using scuba in coastal waters and commercial and research vessels offshore in the deep sea. In 2003 he was science leader of the NORFANZ voyage on GRV Tangaroa. He has published a large number of scientific papers and popular science articles and is particularly interested in the taxonomy, diversity and biogeography of fishes of the Pacific Ocean. Clive was co-author of New Zealand fish, a complete guide and Rockpool fishes of New Zealand. He is lead editor of The Fishes of New Zealand. Andrew Stewart has been the Collection Manager of Fishes at the National Museum and Museum of New Zealand Te Papa Tongarewa since 1982. He has published a number of scientific papers and is co-author of New Zealand fish, a complete guide. He is a major contributor to monthly feature article Something Fishy in the recreational fishing magazine New Zealand Fishing News and was also a writer in the long-running series Museum Marine File which featured in the commercial fishing magazine Seafood New Zealand from 1993 to 2007. He has participated in numerous coastal scuba surveys and offshore ship-based voyages, including major oceanic biodiversity expeditions the NORFANZ survey along the Norfolk and Lord Howe Rises in 2003, and the IPY/CAMP Expedition to Antarctica in 2008. Drawing on his experiences, Andrew has regularly run training seminars on the identification of deep-water fishes as well as giving public talks. Carl Struthers has been Research and Technical Officer at the Museum of New Zealand Te Papa Tongarewa since 2005. Carl is currently researching the taxonomy and phylogeny of the families Sebastidae, Moridae, and Aulopidae in New Zealand and the South Pacific, and has published scientific papers on several New Zealand fish families. His work also includes photography, digital imaging and radiography of fish specimens in support of ongoing research projects. As Te Papa's Dive Officer, Carl is responsible for the underwater dive programme and its safe implementation. He is an experienced field worker, participating in many fish collecting expedition using scuba in coastal waters and blue-water expeditions to remote locations, both within and outside New Zealand waters (e.g. Kermadec, Auckland and Three Kings Islands).