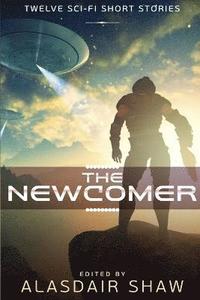 av Alasdair C Shaw
Häftad Engelska, 2016-11-18
116
Köp
Spara som favorit
Tithe by Griffin Carmichael When the world is nothing but a dry husk of itself, a man must choose between a thriving town and keeping on walking. Jacob Heinlein has lost his home, everyone he knew, and hope. He is on a journey to the mythical ocean, an unforgiving sun beating down on him. Delirious and near death, Jacob finds himself in a town with a source of fresh, clean water. Exodus by Alec Hutson The orphaned children of Old Earth are scattered across the solar system, protected from the darkness by god-like beings fashioned from lost technologies. But something has changed. Ancient rules have been broken, and after centuries of isolation one of these beings approaches Mars with overtly hostile intent. First Bonding by Tom Germann Humanity had aimed for the stars and a glorious future in space. The alien's arrival had tarnished that shiny dream. Now the first AIs are fully coming online, even while the government tries to block their use, and humanity is once again looking to the future. The illegally created level 8 AI known as Genghis is locked down in the basement of the corporate building being researched for future use. Powered down so that it can be studied safely in sleep mode everything was fine. Then the meteorites hit damaging the area. That was followed by the robotic invaders that were looking to establish a beach head. Ice Dreamer by J J Green Lab technician Prussis has dreamed all her life of reviving someone from the past. Whilst no-one understands why she keeps trying, she works long hours defrosting heads. In her latest attempt, what happens is the last thing she expects. The Nanny by Cindy Carroll The first natural birth in over two hundred years brings a new life to Cardea's family. Despite the risks, she and her husband are determined to raise a family the old fashioned way. But social habits die hard. Right Hand by Jonathan C. Gillespie The war with a forgotten conqueror has been over for decades, but that doesn't mean the Earth has recovered, and life in the American Midwest is only getting more dangerous. His town besieged by hunter-killer drones left over from the conflict, gifted high school senior Daniel Bell is determined to make the Army believe that the machines are somehow not being harmed by their operations. What Make is Your Cat? by Richard Crawford Welcome to London Atlantis where, after the tsunami, your cat has higher social status and earning power than you do, and evolution is an elite, designer trend you can't afford to join. Kaxian Duty by Cherise Kelley Three-month-old Clem faces his first day of "Kaxian Duty" with anxiety. He is keen to find out what his assignment will be, but runs into distractions on the way to headquarters. Training will be hard. Mistakes will be punished. Oh, and his tail has a mind of its own, which doesn't help matters any. Lessons Learned by J. Naomi Ay Ary had known he was destined to be a starship captain his whole life. After all, his mother was Captain Sandy and his father was the guy who was supposed to be Fleet Admiral. However, the prospect of attending the Spaceforce Academy was daunting. Enough to make Ary question his future. The Humra by Laura Greenwood Bounty hunter Braillen takes a new job on The Humra to get close to her mark. When the crew discover her identity she is whisked in front of the captain. She must face her nightmares if she wants to finish the job and realise her deepest desire. The Hawk of Destiny's Fist by James S. Aaron Asarik Leah is sent to replace ShipLord Till and lead his InquiryShip on a dangerous
Visa hela texten