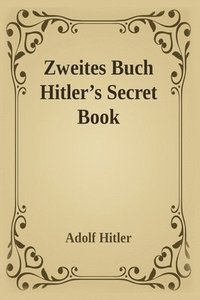 av Adolf Hitler
Häftad Engelska, 2017-09-06
339
Köp
Spara som favorit
Skickas inom 5-8 vardagar.
Fri frakt inom Sverige för privatpersoner.
Zweites Buch is an unedited transcript of Adolf Hitler's thoughts on foreign policy written in 1928, it was written after Mein Kampf and was not published in his lifetime. Now, these historical documents give an insight into the mind (and intentions) of one of the most famous political figures of the 20th Century. A fascinating read and great source of material for students and history buffs alike. Translated by Salvator Attanasio.
Visa hela texten

Adolf Hitler (German: [Ë adolf Ë hItla] (20 April 1889 - 30 April 1945) was a German politician who was the leader of the Nazi Party (Nationalsozialistische Deutsche Arbeiterpartei; NSDAP), Chancellor of Germany from 1933 to 1945 and Fuhrer ("Leader") of Nazi Germany from 1934 to 1945. As dictator, Hitler initiated World War II in Europe with the invasion of Poland in September 1939, and was central to the Holocaust.