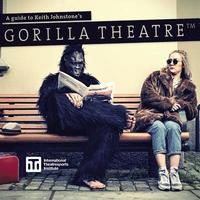 KEITH JOHNSTONE is one of the few internationally recognized authorities in
the field of improvisation, great chunks of which he created, including Theatresports, Maestro Impro (or Micetro Impro), Gorilla Theatre, and The Life Game. Keith has written two best selling books about his Theatre and Improvisation theories and practices, in addition to several plays and short stories.

His books Impro, and Impro For Storytellers, have been translated into many languages. His plays are produced world wide.
Keith's ideas about improvisation, behaviour and performance appeal to a wide variety of groups. From Actors to Psychotherapists, Improvisation companies to Theatre Schools and Companies, Business and Management training specialists and Humanities Research Institutes, Universities and Film Production Companies have invited him to come to teach them about his ideas, and how they might apply them.

He founded the Theatre Machine Improvisation group in England in the 1960's, touring Europe and North America , was the Co-founder and Artistic Director of The Loose Moose Theatre Company in Calgary, Canada in the 1970's, 80's and 90's. He founded The International Theatresports Institute in 1998. Patti Stiles is an actor, director, playwright, teacher and improvisation artist living in Australia.

She received her training at Calgary, Alberta's world-renowned Loose Moose Theatre under Keith Johnstone. It was there she worked intensively with Keith Johnstone in many forms of improvisation. She performed regularly in Theatresports, Gorilla Theatre and Life Game as well as performing in Keith's plays, directing and performing in the Theatre For Kids program and touring productions.

Stiles moved to Toronto Canada and was the Artistic Director of Dream Kitchen Theatre, which produced Theatresports. From there she moved to Edmonton Alberta and was Artistic Director of Rapid Fire Theatre from 1991 - 1996. Young performers in the company at this time include Mark Meer, Jacob Banigan, Josh Dean, Nathan Fillion whom she helped to train. Along with her AD duties Patti was very involved with other theatre endeavours. She directed David Belke's production of The Maltese Bodkin which featured Nathan Fillion (in one of his first theatrical roles) and received an Elizabeth Sterling Haynes Award for Outstanding Fringe Production. In Edmonton Patti wrote her first play for Theatre For Young Audiences called If Whales Could Tell Tales, which was commissioned by the Provincial Museum. She was heavily involved in the Edmonton Fringe Festival as actor, director or productions as well as their opening / closing ceremonies and also the Edmonton Street Performers Festival as a roving character artist, director of Women In Comedy or performer in Late Night Madness. Patti also had the honour of being a founding member of Die-Nasty: The Live Improvised Soap Opera (nominated for several Canadian Comedy Awards and winner of the 2006 award for Best Improv Troupe) and holds the ...

What is Gorilla Theatre™?

The Beginning of Gorilla Theatre™

What Gorilla Theatre™ can achieve

What you need for basic Gorilla

Fighting for your scene

Taking the stage as Director

How to Move Scenes Forward by Directing / side coaching

Suggestions on how to end scenes

Performing with the Gorilla

Not Using a Gorilla

Add Theatricality and Spectacle to the Show