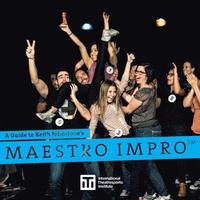 av Keith Johnstone, Steve Jarand
Häftad Engelska, 2019-02-19
169
Köp
Spara som favorit
This guide is for all those wishing to train in and produce Maestro Impro?. It is a fantastic format to experience Impro Keith Johnstone style and receive all of the personal and group benefits that go along with it. Maestro Impro? player/directors develop in storytelling, spontaneity, joyful failure, confidence, teamwork, playfulness and so much more.

In the late 1950's Keith Johnstone was experimenting with Theatresports? in London England. It was first produced in Calgary, Canada in 1977, from there spread around the world and is now played in over 90 countries.

Maestro Impro? was developed in the early 1990s and is now played popularly worldwide.

The International Theatresports? Institute was created by Keith to entrust and manage his Impro formats.

The ITI grants performance rights to groups wishing to train on and perform the Keith Johnstone formats of Theatresports?, Maestro Impro? and Gorilla Theatre?. Money from royalties goes to member benefits, building the Impro community and managing the trademark and legacy. Keith himself has never taken any profit from the licensing of Theatresports?.

ITI members have select access to the Maestro Impro? Guide but it is also available for purchase to anyone.
Visa hela texten

KEITH JOHNSTONE is one of the few internationally recognized authorities in
the field of improvisation, great chunks of which he created, including Theatresports, Maestro Impro (or Micetro Impro), Gorilla Theatre, and The Life Game. Keith has written two best selling books about his Theatre and Improvisation theories and practices, in addition to several plays and short stories.

His books Impro, and Impro For Storytellers, have been translated into many languages. His plays are produced world wide.
Keith's ideas about improvisation, behaviour and performance appeal to a wide variety of groups. From Actors to Psychotherapists, Improvisation companies to Theatre Schools and Companies, Business and Management training specialists and Humanities Research Institutes, Universities and Film Production Companies have invited him to come to teach them about his ideas, and how they might apply them.

He founded the Theatre Machine Improvisation group in England in the 1960's, touring Europe and North America , was the Co-founder and Artistic Director of The Loose Moose Theatre Company in Calgary, Canada in the 1970's, 80's and 90's. He founded The International Theatresports Institute in 1998. Steve graduated from the University of Calgary Drama Department in 1991 and has been doing improvisation since 1987 beginning at Loose Moose theatre in Calgary, Canada.
Since 1991 he has produced nature and history theatre performing in schools, mountain parks museums and zoos.
Steve began working with masks in 1999 with the support of Keith Johnstone, then soon after, teaching at home and overseas.
Each year the Trancemask tour of Europe gets broader in scope. Advanced student courses are now held in half and full mask. Masks are popping up regularly in Impro shows and prepared mask pieces are also performed.
In 2016 Steve completed a ten month round the world trip with the masks teaching and performing in Columbia, Peru, Brazil, New Zealand, Hong Kong and Japan.

What is Maestro Impro?

Maestro Around the World

What Maestro Can Achieve

How Maestro is Unique

What You Need for Maestro

Placement of the Directors

The Start of the Show

The Emcee and Scorekeeper

Who and When to Direct

Awareness of the Players

The Winner and Ending the Show