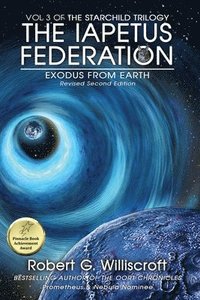 Aided by Founder Asshur, besieged Israelis on Earth make their way to Mars. Under Rod Zakes, the Iapetus Federation expands to include the human-settled parts of the Solar System, protected by Dmitri Gagarin?s Federation Security Force.

While global Jihad rages, the Starchild Institute on Iapetus develops a form of worm-hole transportation, but will this new technology be ready in time to rescue Sam Houston and all that is left of the United States, the beleaguered Lone Star Federation?

Can worm-hole technology solve the task of moving millions of people from Earth to Iapetus?

While Earth sinks into medieval barbarism, off-world humanity struggles to survive and prosper in the far reaches of the Solar System ? and beyond.
Visa hela texten

williscroft takes big conceptual bites in his conclusion to his hard science-fiction trilogy about mankind’s expansion into space. vol. 3 of the starchild series, The Iapetus Federation, features FTL ships; handy, instantaneous transportation across space; the evacuation of the Jewish state to Mars; bioengineered immortality, and more, all against a backdrop of a hundred and fifty thousand years of human history. Indeed, as the novel drew to its close, I felt that its wonders would never cease. There’s a type of science fiction called “Mind-blowing” (I have a book with just that title). This novel piles mind-blowing concept upon mind-blowing concept, all of it rooted in rigorous scientific speculation and theory.

and oh, how could i forget? the author takes the current threat of radical islam and expands it into an international jihad, all of it stemming from the failure in vol. 2 to kill a jihadist stowaway on Cassini II. Yes, actions or the lack of them often have consequences, and Williscroft brilliantly traces the malignant spread of the Caliphate into country after country. More than anything else, it is this menace that drives humanity’s exodus from Earth.

williscroft’s aim in the trilogy, and especially in this concluding novel, is so ambitious and inspiring, it swept me right along. when i neared the conclusion, i thought for a moment he had slipped. the ending, though, was delightfully perfect, and i hope a sign of more stories to come in this universe.

– Professor John B. Roseman, Norfolk State University, Former Chairman of the Board, Horror Writers Association, Author of The Inspector of the Cross Series.

The Iapetus Federation is more than a broad-ranging and fitting sequel to Slingshot and The Starchild Compact. It is an epic of international intrigue, heroic fights for survival, and the opening of the Solar System on a massive scale...and that’s just for starters. This book opens the door to the galaxy and both the past and future of humans and the Ectarians.

williscroft has done it again, packing in plenty of adventures, ideas and characters. i’m looking forward to what comes next.

The Iapetus Federation is the third book in the author’s Starchild sci-fi series centered around an ancient race of technologically advanced beings – the Ectarians – and their journey to Earth 150,000 years ago just before their star would go nova and destroy their home planet. Make no mistake, this novel is hardcore science fiction with a cast of characters that spans 4 pages and a glossary of terms that spans 9 pages. Author Williscroft delivers a rich tapestry of characters woven through an intricate storyline. There is no attempt to hide the parallels with present-day strife and conflict between Christians and M...

Dr. Robert Williscroft is a retired submariner, diver, scientist, businessman, adventurer, author. He spent 22 months underwater, a year in the equatorial Pacific, 3 years in the Arctic, and a year at the Geographic South Pole conducting atmospheric research. He has appeared on dozens of radio talk shows, and nationally on the Michael Medved show, CNBC, and FOX News.