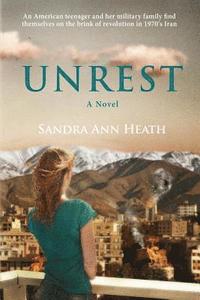 A Coming-of-Age Story Beneath the Alborz Mountains

av Sandra Ann Ann Heath
Häftad Engelska, 2016-02-25
199
Köp
Spara som favorit
Finns även som
Visa alla 1 format & utgåvor
UNREST tells the story of seventeen-year-old Annie Patterson, plucked from her comfortable existence in the American Midwest, to travel with her mom and siblings to join her lieutenant colonel father in Tehran, Iran. It's the late 1970s, and unbeknownst to the Patterson family, Iran is on the verge of phenomenal and unprecedented change. Initially, culture shock envelopes Annie as much as the black robes that cloak the people milling in the airport, or the pollution that hovers below the snowcapped peaks of the Alborz Mountains. Cultural differences are soon embraced as the two Patterson sisters meet two Iranian teenage boys at the side of a dusty soccer field. Experiences begin to deepen: a whirlwind tour of the ancient Grand Bazaar, a picnic on an aged Persian carpet, and a Persian wedding and dancing beneath a looming moon amid the sweet fragrance of jasmine. But as the saying goes: "all is [not] fair in love and war", and the two sisters find themselves attracted to the same man. Soon, though, unrequited love becomes the least of Annie's worries as the rumblings of dissent and unrest become too loud to ignore: movie theater fires, restaurant bombings, the imposition of martial law, foolish dalliances after curfew, even dangerous encounters with roving gangs of dissenters and bloodied demonstrators. As uncertainty overtakes daily life and the overthrow of the Shah becomes imminent, activities such as work and school must go on with sheer determination and courage. Trapped by tumultuous demonstrations in the streets, Annie spends a passion-filled night with her Persian protector, to the extent that an innocent teenage girl and an adult boy bound by religious sensibilities can. Ultimately, the country unravels, the Shah's regime ends, and the Patterson family and their Iranian friends must figure out what to do next (Inshallah, God Willing), before "persecute; purge; pious" becomes the motto of the day, and Annie and her family are forced to live life as if there were no tomorrow, in the midst of heart-numbing UNREST.
Visa hela texten

"An American teenager learns about love and loss in the midst of 1978 [1979] 's Iranian Revolution.
Seventeen-year-old Annie Patterson is a member of the quintessential American military family, with her mother; older sister, Debbie; and younger brother, Frankie, never staying too long in one place, ever at the whim of her lieutenant colonel father's next Air Force assignment. Their newest destination is Tehran, a far cry from the Midwestern life they were only just settling into. Culture shock isn't Annie's only worry, however, as rebellion has begun to stir in Iran, and unbeknown to her or even her father, 1978 is the year in which Islamic and leftist revolutionaries will depose the
Western-backed shah and install Ruhollah Khomeini as the grand ayatollah. As dissension and anti-American sentiment creep in around the edges of her new life, Annie still finds much about Iran to fall in love with, from its rich history to the daily, haunting beauty of the call to prayer and the stirring poetry of Forough Farrokhzad. But most alluring is the motorcycle-riding "Urban Cowboy" Amir, who catches the eyes of both Annie and Debbie and whose bravery in the
face of his own countrymen's anger may be all that protects the Patterson girls. Heath's debut novel immerses the reader in Iran on the cusp of its historically unexpected revolution, from the fantastical bazaars to the competing ideologies of its Western modernization and Islamic orthodoxy. Though not a thriller in the traditional sense, there is rising suspense
throughout the story, with Annie's mother's quiet nervousness, long gas lines, and the initially more inconvenient than frightening curfews slowly giving way to riotous demonstrations, vandalism, terrorism, and home invasions-all directed at Americans and the shah's regime. Annie functions as a strong narrator, the story told solely from her perspective, allowing teenage romance to retain the same dramatic importance as cultural insurrection, while remaining surprisingly nonjudgmental about the uprising's circumstances (no black-and-white villains here). The only downside is
that Annie's reserved nature often leaves her isolated inside the Pattersons' plush Iranian home, while the adventures of Debbie, who, while more self-involved, is much quicker to engage with Iranian culture, are only relayed secondhand.

Sandra Ann Heath grew up in a military family living around the world including Greece, England, Germany and the United States. In 1978, her family was transferred to Iran where this novel takes place. She now lives in New England with her husband and two sons.