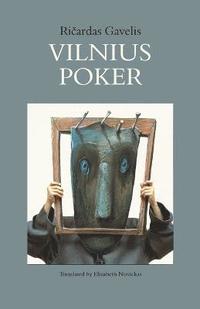 av Ricardas Gavelis
Häftad Engelska, 2016-10-08
201
Köp
Spara som favorit
Finns även som
Visa alla 1 format & utgåvor
A dark, enigmatic, and visceral examination of the psychology of repression, Vilnius Poker dives into the minds of four narrators whose contradictory memories challenge the very idea of truth. In this masterpiece written "for the drawer," Vilnius itself becomes a presence possessing a will, a consciousness and, worse, an intent. First published in 1989 when Lithuania was on the verge of breaking away from the Soviet Union, this book raised a firestorm for its brutality, frank sex, and its destruction of the myths of Lithuanian history.
Visa hela texten

"Gavelis's first novel to be translated into English is philosophical, symbolic, and full of imagery that is both disturbing and beautiful. ... Keep reading and you will be rewarded with a provocative and chilling narrative, one that suggests Joyce, Kafka, and Camus."
-Library Journal.

"Narratives and divergent timelines collide in apparent chaos, without losing the thread of the story for a second. We finally understand: this is a fractal epic, very cleverly put together, where the smallest anecdotal detail refers to the macrocosm of history as a whole. ... Terrifying and awesome."
-Mehdi Belhaj Kacem, Philosophie Magazine.

"At times shocking, at times depressing, Gavelis's Vilnius bursts with intensity and purpose, demanding that attention be paid to it. This novel is not for the faint of heart; it is a forceful statement that is on its way towards becoming a touchstone of 20th-century literature."
-Andrew Wessels, bookslut.com.

"Gavelis's urban grunge and his portrayal of the bleakness and absurdity of Soviet life provide the perfect backdrop for what, at times, is a curiously hilarious novel. ... Uncertainty reigns in Gavelis's Vilnius, and the novel challenges its reader with the simple question: who's crazy now?"
-Julija ukys, Lituanus.

Riardas Gavelis was born in 1950 in Vilnius, Lithuania. He finished his studies in theoretic physics at the University of Vilnius in 1973, the same year his first published stories appeared in the journal Nemunas. He worked at the Institute of Physics and Mathematics for several years before publishing his first book, a collection of short stories, in 1976. He has written seven novels and five short story collections; in addition, he worked at various cultural journals from 1978 to 1982, and as a columnist for a daily newspaper and a newsmagazine from 1992-2002, writing on politics and economics. His work has been translated into French, Polish, German, Latvian, Swedish, English and Finnish. Vilnius Poker, considered by some to be his masterpiece, was a best seller in Lithuania and has gone through six editions. He died suddenly in 2002.