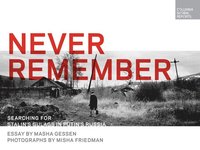 av Masha Gessen, Misha Friedman
Inbunden Engelska, 2018-04-01
279
Köp
Spara som favorit
Skickas inom 5-8 vardagar.
Fri frakt inom Sverige för privatpersoner.
"A book that belongs on the shelf alongside The Gulag Archipelago. -- Kirkus Reviews "A short, haunting and beautifully written book." -- The Wall Street Journal The Gulag was a monstrous network of labor camps that held and killed millions of prisoners from the 1930s to the 1950s. More than half a century after the end of Stalinist terror, the geography of the Gulag has been barely sketched and the number of its victims remains unknown. Has the Gulag been forgotten? Writer Masha Gessen and photographer Misha Friedman set out across Russia in search of the memory of the Gulag. They journey from Moscow to Sandarmokh, a forested site of mass executions during Stalin's Great Terror; to the only Gulag camp turned into a museum, outside of the city of Perm in the Urals; and to Kolyma, where prisoners worked in deadly mines in the remote reaches of the Far East. They find that in Vladimir Putin's Russia, where Stalin is remembered as a great leader, Soviet terror has not been forgotten: it was never remembered in the first place.
Visa hela texten

"Under Putin--whose motto might as well be 'Make Russia Great Again'--Stalin's rule is now remembered as a time of glory and order....It is a grim reminder that once again, as in the 1930s, all over the world authoritarian strongmen are riding high." -- Adam Hochschild, The New York Times Book Review "A short, haunting and beautifully written book." -- The Wall Street Journal "Gessen's delicate prose and deft skill as an interviewer combine with Friedman's haunting photography to produce a partial record of the ruins of Soviet prison camps in Sandarmokh, Perm and Kolyma, and of the fraught memorialization efforts that followed perestroika and the Soviet Union's collapse." -- Times Literary Supplement "The author Masha Gessen and the photographer Misha Friedman have done what they could in Never Remember: Searching for Stalin's Gulags in Putin's Russia to combat the erasure of memory regarding the Gulag. They have accomplished this in two distinct but complementary ways-Gessen by interviewing descendants of those imprisoned as well as other private citizens who have in various ways done what they could to document and preserve the record of mass incarceration and state-murder, and Friedman by photographing the ghostly-and certainly haunting-remains of the camps."--The Daily Beast "A book that belongs on the shelf alongside The Gulag Archipelago."-- Kirkus Reviews "Drawing on years of interviews, research, and travel, Gessen and photographer Friedman reflect on complex Russian attitudes to the legacy of the gulag in this vital collection of essays and photographs....Friedman's moody, panoramic black-and-white photos of the memorial sites convey a narrative that's fragmented, blurry, and ultimately incomplete, perfectly underscoring Gessen's text. The combination is a powerful meditation on contemporary Russia as seen through its relationship to the past." -- Publishers Weekly (starred review)

Masha Gessen is a Russian-American journalist and the bestselling biographer of Vladimir Putin. Gessen's books include The Future is History: How Totalitarianism Reclaimed Russia, winner of the 2017 National Book Award for Nonfiction, and The Man Without a Face: The Unlikely Rise of Vladimir Putin. She is the recipient of numerous other awards, including a Guggenheim Fellowship and a Carnegie Fellowship, and her work appears regularly in The New York Times, The New Yorker, The New York Review of Books, Vanity Fair, and Slate. A longtime resident of Moscow, Gessen now lives in New York City. Misha Friedman regularly photographs for The New Yorker, Time, Der Spiegel, GQ, Le Monde, Bloomberg BusinessWeek, Sports Illustrated, Amnesty International and Doctors Without Borders. His work has received numerous awards, including grants from the Pulitzer Center for Crisis Reporting. He was born in Moldova and graduated from Binghamton University and the London School of Economics. He taught himself photography while working in humanitarian medical aid. He lives in New York City.