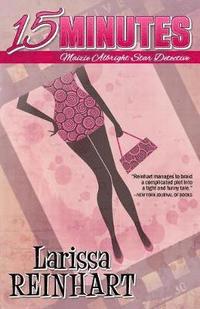 “hollywood glitz meets backwoods grit in this fast-paced ride on d-list celeb maizie albright's waning star—even as it's reborn in a spectacular collision with her nightmarish stage mother, her deer-pee-scented-apparel-inventing daddy...and a murderer. sassy, sexy, and fun, 15 minutes is hours of enjoyment—and a wonderful start to a fun new series from the charmingly southern-fried reinhart.” — phoebe fox, author of The Breakup Doctor series

“i was already a huge fan of larissa reinhart’s cherry tucker series, but in her new mystery series, fifteen minutes, she had me at the end of the first line: ‘donuts.’ maizie albright is the kind of fresh, fun, and feisty ‘star detective’ i love spending time with, a kind of nancy drew meets lucy ricardo. move over, janet evanovich. reinhart is my new ‘star mystery writer!’” — penny warner, author of Death of a Chocolate Cheater and The Code Busters Club

“larissa reinhart’s newest heroine, maizie albright, is at once naïve and worldly. as a former child star, she craves life in the real world by becoming a pi, just like the tv character that made her famous. armed with humor, charm, and stubborn determination, maizie is a breath of fresh air. i adored every second of 15 minutes. viva la maizie!” — terri l. austin, author of the Rose Strickland Mysteries and the Null for Hire series.

"15 MINUTES is the first book in the new Maizie Albright Star Detective series by Larissa Reinhart and it is a winner. Imagine a mashup of Nancy Drew, Lindsay Lohan and the Duck Dynasty! The situations that she finds herself in are humorous, but she isn’t a joke. She is a feisty, perceptive young woman.I strongly recommend this book and look forward to the next in this series." -- Lynn S. Farris, Hot Mystery Reviews