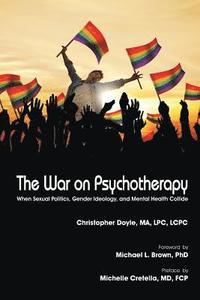 The War on Psychotherapy

This year marks the 50th anniversary of the 1969 riots at the Stonewall Inn in Greenwich Village, New York?the spark that lit the fire of the modern gay rights movement in America. What has resulted in the following five decades is the takeover of a new ideology of sex and gender, with devastating effects on all sectors of our society. Consequently, we are now embroiled in a war of ethics and morality over sexuality and gender, and the battle is being waged in our courts, our college campuses, and our counseling offices. Even our churches and synagogues are in the thick of this conflict. Tragically, our precious children have become the innocent casualties in this war.

Lesbian, gay, bisexual, and transgender (LGBT) activists have successfully convinced over a dozen states and over 45 cities to ban so-called ?conversion therapy? for minors, while campaigns to restrict licensed psychotherapy for adults are mounting in liberal areas like California and New York City. Abroad, several countries have banned the practice altogether, with the United Kingdom currently debating the question: Should it be illegal for a licensed mental health professional to help patients voluntarily alter their sexual orientation or gender identity? Should clinicians even be able to talk with clients who are distressed over unwanted attractions, sexual behaviors, or gender expressions and seek options for change? Will those who came out of the closet succeed in putting dissenters and strugglers in the closet?

How far will this movement go in terms of defining client autonomy, self-determination, and freedom of choice? To what extent will it rewrite our laws? To what degree will it silence those who refuse to fall in line with its radical goals? Who will stand up and put a stop to this madness? In The War on Psychotherapy, licensed psychotherapist Christopher Doyle provides a map of this unprecedented assault on personal freedom and religious liberty while offering meaningful solutions on how licensed clinicians, informed legislators, and responsible citizens can work together to stop fraudulent LGBT activism, end truly harmful counseling practices, and ensure safe and effective assistance for those who are struggling and sincerely seeking help for sexual and gender identity conflicts.
Visa hela texten

Christopher Doyle, MA, LPC, LCPC is a licensed psychotherapist and the executive director of the Institute for Healthy Families, a non-profit Judeo-Christian therapeutic organization in the Washington, D.C. area. He is also the founder and clinical director of Northern Virginia Christian Counseling, specializing in the integration of psychology and theology in counseling. Christopher also serves as a therapist at Patrick Henry College, where he provides mental health counseling for their students.

A leader in the #TherapyEquality movement, Christopher is the co-founder of the National Task Force for Therapy Equality and the plaintiff in Doyle v. Hogan, challenging the unconstitutional ban on licensed therapy for minors struggling with sexual and gender identity conflicts in the state of Maryland. In 2013, he founded Voice of the Voiceless, a non-profit organization advocating for individuals and families struggling with unwanted same-sex attraction and gender identity conflicts.
Christopher is the author of several books on sexuality, including: The Meaning of Sex: A New Christian Ethos, Benefits of Delaying Sexual Debut, and Acception: Bullying Solutions and Prevention Health Education Curriculum. He frequently writes on sexual health and has been published in Issues in Law & Medicine and the Journal of Human Sexuality, along with many print and online outlets, including Townhall, World Net Daily, and The Christian Post.

As an advocate for sexual health, Christopher has been featured in six documentaries, including Voices of the Silenced (Core Issues Trust), The Third Way: Homosexuality and the Catholic Church (Blackstone Films), Inside Out (Adam Perez), and The Sunday Sessions (Dickie Bruce Productions), a 2019 documentary on his work as a sexual identity psychotherapist. He has been interviewed in hundreds of media outlets, including The Dr. Oz Show, Fox News Radio, National Public Radio, American Family Radio, and the Christian Broadcasting Network. His work has been featured in USA Today, NBC News, CNN, Associated Press, ABC/Fusion, AOL, BuzzFeed, The Washington Post, World Magazine, Atlantic Magazine, National Catholic Register, Citizen Magazine, and many more.

Christopher has been married to his wife, Sherry, for 12 years, and together they have five children. They make their home in Purcellville, Virginia.