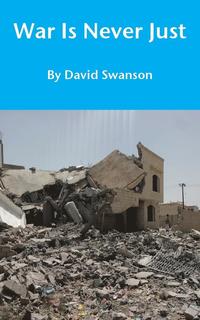 Swanson builds a case that the time has come to set behind us the idea that a war can ever be just.
Visa hela texten

Past Praise for the Author's Work

"David Swanson is a truth-teller and witness-bearer whose voice and action warrant our attention." -Cornel West, author.

"David Swanson predicates his belief that nonviolence can change the world on careful research and historical analysis." -Kathy Kelly, activist and author.

"Our times cry out for a smart, witty and courageous Populist who hasn't forgotten how to play offense. Luckily we have David Swanson." -Mike Ferner, activist and author.

"David Swanson, who has been a one-man wonder leading the charge for accountability, writes a compelling narrative that inspires not just outrage, but ACTION." -Medea Benjamin, activist and author.

"David Swanson despises war and lying, and unmasks them both with rare intelligence. I learn something new on every page." -Jeff Cohen, activist and author.

"Swanson's book is far more uplifting and inspiring than virtually any other book in its genre, as it devotes itself to laying out a detailed plan for how American citizens-through the activism to which he has devoted himself-can bring about a rejuvenation of our political values." -Glenn Greenwald, author.

"David Swanson is the most consistently great writer of this generation." -Jean Athey, activist.

"David Swanson is an antidote to the toxins of complacency and evasion. He insists on rousing the sleepwalkers, confronting the deadly prevaricators and shining a bright light on possibilities for a truly better world." -Norman Solomon, activist and author.

"I am always impressed and inspired by David's prolific energy and I admire his unwavering opposition to all war, not just the ones started or continued by Republicans." -Cindy Sheehan, activist and author.

"David Swanson writes like he talks; that is to say, in clear, sharp language that gets to the root of the issue, but in a very personal way...as if you are having a one-on-one conversation with him." -Leah Bolger, activist.

David Swanson is an author, activist, journalist, and radio host. He is director of WorldBeyondWar.org and campaign coordinator for RootsAction.org. Swanson's books include War Is A Lie and When the World Outlawed War. He blogs at DavidSwanson.org and WarIsACrime.org. He hosts Talk Nation Radio. He is a 2015 and 2016 Nobel Peace Prize Nominee.

Introduction 7
What Is A Just War? 9
Just War Theory Facilitates Unjust Wars 12
Preparing for a Just War Is a Greater Injustice Than Any War 17
Just War Culture Just Means More War 24
The Ad Bellum / In Bello Distinction Does Harm 30

The Criteria For Just Drone Murders Are immoral, Incoherent, And Ignored 67

Why Do Ethics Classes Fantasize About Murder So Much? 69
If All Just War Criteria Were Met War Still Wouldn't Be Just 77
Just War Theorists Do Not Spot New Unjust Wars Any Faster Than Anyone Else 77
A Just-War Occupation Of A Conquered Country Is Not Just 80
Just War Theory Opens The Door To Pro-War Theory 85
We Can End War Without Waiting For Jesus 86
Who Would The Good Samaritan Carpet Bomb? 91