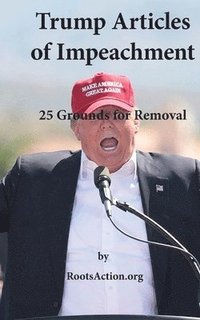 Since then, RootsAction has developed the other 23 articles of impeachment published here, and flooded Congress Members with hundreds of thousands of emails from their constituents urging that these or similar articles be introduced and voted on. We encourage readers to give this book to Congress Members and let them know that you want at least some of these articles of impeachment introduced, passed, and sent to the Senate for a trial.

Following the articles of impeachment in this book is an outline of an impeachment strategy, followed by a list of frequently asked questions together with answers from RootsAction.
Visa hela texten

introduction 4 violation of constitution on domestic emoluments 5 violation of constitution on foreign emoluments 7 incitement of violence 9 interference with voting rights 12 discrimination based on religion 16 illegal war 18 illegal threat of nuclear war 20 abuse of pardon power 21 obstruction of justice 23 politicizing prosecutions 24 collusion against the united states 28 failure to reasonably prepare for or respond to hurricanes 29 separating children and infants from families 32 illegally attempting to influence an election 35 tax fraud and public misrepresentation 36 assaulting freedom of the press 39 supporting a coup in venezuela 44 unconstitutional declaration of emergency 46 instructing border patrol to violate the law 49 refusal to comply with subpoenas 51 declaration of emergency without basis 53 illegal proliferation of nuclear technology 55 illegally removal from the inf treaty 57 seeking foreign governments’ resources vs. political rivals 59 refusal to comply with impeachment inquiry 61 impeachment strategy 63 impeachment faq 69 about rootsaction.org 80