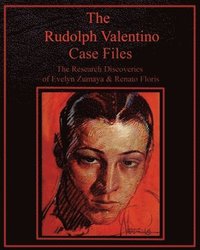 av Evelyn Zumaya, Renato Floris
Häftad Engelska, 2021-06-16
625
Köp
Spara som favorit
Fictionalized versions of Rudolph Valentino's story plagued the star even before his death. His employers in the motion picture industry contributed to the problem by issuing stock press releases of his life story, carefully crafted as marketing. In the months prior to his death in 1926, Valentino became determined to have his true story told. Working with Spanish journalist Baltasar Fernndez Cu, he launched a project to pen his authorized autobiography. Death prevented Valentino's dream from realizing, but his true story is now being told as a result of research conducted by Evelyn Zumaya and Renato Floris.

When Evelyn Zumaya began researching Valentino in 1999, she discovered lost archives relating to Valentino which had never been accessed by any biographer. With this ground-breaking material as her unique source, Rudolph Valentino's documented history emerged.

In 2011, Zumaya began a collaboration with Italian publisher, translator and author Renato Floris, and together they continued investigating Valentino in the U.S. and in Italy. Evelyn Zumaya and Renato Floris' resulting research archive includes a wealth of diverse material in narrative and image which alters the life story of Rudolph Valentino as it has been known popularly for decades.

With colorized images, three hundred and fifty-four pages and with an introduction by Renato Floris, The Rudolph Valentino Case Files includes the entire 1956 Robert Florey serialized Valentino articles, "Unforgettable, Unforgotten, Rudolph Valentino Survives his Legend", a definitive analysis of the ghost-written My Private Diary, articles by Ms. Zumaya about her ground-breaking discoveries and translations of Italian articles about Valentino which are presented for the first time.
Visa hela texten