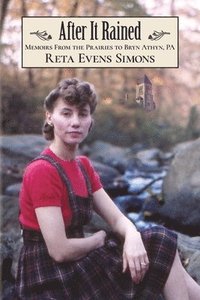 Memoirs from the Prairies to Bryn Athyn, PA

av Reta Evens Simons, S Leigh Matthews
Häftad Engelska, 2019-11-20
239
Köp
Spara som favorit
Skickas inom 10-15 vardagar.
Fri frakt inom Sverige för privatpersoner.
What is it like to cross a foreign country alone at age 14, going to live in a strange town where you don't know a soul? Reta Evens Simons tells just how it was in 1929, when she left her home on a farm in Western Canada and took the train all the way east to Bryn Athyn, PA, in the USA. This unique small town has both castle and Gothic cathedral. Bryn Athyn during the Great Depression was the lap of luxury compared to the Dust Bowl back home. As few books have done before, Reta includes here history of the town?s origin and unusual structure along with vivid accounts of  its people.

In 1967, after writing  It Rained at Harvest Time:  Memoirs of the Forever Prairie,  the story of her 1920's childhood, Reta wrote this true tale of her teenage years and after, living in Bryn Athyn,  Northeast of Philadelphia.

A real fish-out-of-water, Reta supported herself by residing with a ruthless couple cooking, cleaning, and caring for their children ? all while she attended high school. They paid her only an ?allowance? of 25 cents a week.

Always hardworking, she still found time for escapades. From pre-dawn picnics to autogiro rides. Trips to the mountains and the seashore. Dancing to big bands.

Reta loved  dressmaking, but she also dated plenty of boys. Her life kept changing as she went from meeting movie stars to living in the castle, working for its wealthy residents. She describes the intriguing interactions between her employers and those who worked for them. From farmhouse on the prairie to suburban castle and beyond, you can read it here and see photos and illustrations from  her 1930's life in  Bryn Athyn and back on the farm. Astonishing to compare today to those innocent times!

Bloggat om After It Rained