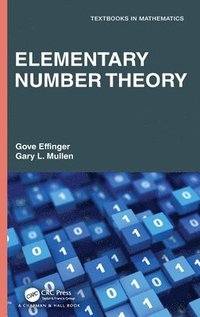 av Gove Effinger, Gary L Mullen
Inbunden Engelska, 2021-09-09
2341
Köp
Spara som favorit
Finns även som
Visa alla 3 format & utgåvor
Elementary Number Theory, Gove Effinger, Gary L. Mullen This text is intended to be used as an undergraduate introduction to the theory of numbers. The authors have been immersed in this area of mathematics for many years and hope that this text will inspire students (and instructors) to study, understand, and come to love this truly beautiful subject. Each chapter, after an introduction, develops a new topic clearly broken out in sections which include theoretical material together with numerous examples, each worked out in considerable detail. At the end of each chapter, after a summary of the topic, there are a number of solved problems, also worked out in detail, followed by a set of supplementary problems. These latter problems give students a chance to test their own understanding of the material; solutions to some but not all of them complete the chapter. The first eight chapters discuss some standard material in elementary number theory. The remaining chapters discuss topics which might be considered a bit more advanced. The text closes with a chapter on Open Problems in Number Theory. Students (and of course instructors) are strongly encouraged to study this chapter carefully and fully realize that not all mathematical issues and problems have been resolved! There is still much to be learned and many questions to be answered in mathematics in general and in number theory in particular.
Visa hela texten

Gove Effinger received his Ph.D. in Mathematics from the University of Massachusetts (Amherst) in 1981 and subsequently taught at Bates College for 5 years and then Skidmore College for 29 years. He is the author of three books: An Elementary Transition to Abstract Mathematics (with Gary L. Mullen, CRC Press), Additive Number Theory of Polynomials over a Finite Field (with David R. Hayes), and Common-Sense BASIC: Structured Programming with Microsoft Quick BASIC (with Alice M. Dean), as well as numerous research papers. His research focus has primarily been concerned with the similarities of polynomials over a finite fields and ordinary integers. Gary L. Mullen is Professor of Mathematics at the Pennsylvania State University, University Park, PA. He has taught both undergraduate and graduate courses there for over 40 years. In addition, he has written more than 150 research papers and co-authored seven books, including both graduate as well as undergraduate textbooks. He also served as department head for seven years and has served as an editor on numerous editorial boards, including having served as Editor-in-Chief of the journal Finite Fields and Their Applications since its founding in 1995.

1. Divisibility in the Integers Z 2. Prime Numbers and Factorization 3. Congruences and the Sets Zn 4. Solving Congruences 5. The Theorems of Fermat and Euler 6. Applications in Modern Cryptography 7. Quadratic Residues and Quadratic Reciprocity 8. Some Fundamental Number Theory Functions 9. Diophantine Equations 10. Finite Fields 11. Some Open Problems in Number Theory A. Mathematical Induction B. Sets of Numbers Beyond the Integers