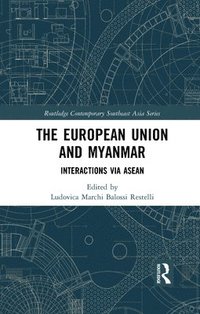 The European Union and Myanmar

av Ludovica Marchi Balossi Restelli
Häftad Engelska, 2021-06-30
686
Köp
Spara som favorit
Finns även som
Visa alla 1 format & utgåvor
This book analyses European foreign policy as the activity of the European Union (EU) as a global actor and explores its efforts to raise its visibility in Southeast Asia through its relations with the Association of Southeast Asian Nations (ASEAN) and Myanmar. Contributors examine the EU's engagement in a process of dynamic consolidation of its relationship with Asia and the Pacific region. They shed light on how interregional relations with ASEAN and interactions with Myanmar can be viewed as a perfect opportunity to promote the EU's presence in the region. Chapters examine the EU's efforts to inspire Myanmar to connect with security cooperation and Myanmar's engagement with the EU to diversify its foreign relations with China. The book also explores the extent to which the EU has failed regarding the Rohingya crisis and whether the EU's effort to support the peace process in Myanmar has been beneficial. A timely and important contribution to the growing literature on the EU's role in the world and its relations with East and Southeast Asia, this book will be of interest to academics in the field of International Relations, European Politics and Foreign Policy, Comparative Regionalism, East Asian and Southeast Asian Studies.
Visa hela texten

'While Myanmar may have momentarily receded from the limelight in terms of global attention, this edited book by Ludovica Marchi ensures that observers of Myanmar and the European Union will not lose the necessary understanding of this nation and its relationship and dialogue with the European Union. Marchi has in this book compiled chapters and themes which allow us to understand, address and question the way in which the European Union sought to enhance its visibility in this region and within Myanmar. The book itself in different chapters has indicated that there were successes and less so in this pursuit. We are treated to a range of macro foreign policy matters which allow the reader to be both observers and experts in an area where the influence of China is also a player of note. The variety of chapters and authors reminds us that there is a bundle of expertise concentrated in this book which shines a light on a poorly understood relationship of an even lesser understood country. Marchi's personal effort in this book, writing four of the seven chapters, demonstrates her own expertise and durability in pursuing this theme amply demonstrated in this book. I have known Dr. Marchi for years and her dedication to this theme, at each conference, with each paper is a testimony of her persistence in bringing greater awareness to the European Community of the Myanmar question. This book is the culmination of this admirable work which deserves the heartiest of congratulations'. - Professor Bruno Mascitelli, Swinburne University of Technology, Melbourne, Australia 'Myanmar represents an ancient nation of Buddhism and gold in East Asia in general and military regime in particular. The recent political development of democratization shows a possibility of economic growth and political stability in the nation that would also contribute to strengthening the East Asian region as a whole. Under such circumstance, Dr. Marchi focuses on relationships between the European Union and Myanmar particularly via ASEAN. The book explores comprehensive issues on Myanmar including diplomacy, economics, politics, development strategies, regional competition of global actors etc. It also analyses the European Union's economic, diplomatic and political interest particularly in the Southeast Asian sphere due to its historical heritage of the colonization era, and envisages its further engagement in order to play EU's roles as a global competitor in the region. Consequently, it is noteworthy to read the book and extend intellectual horizon beyond the government of Myanmar and the diplomacy of the EU'. - Sang Chul Park, Professor at Graduate School of Knowledge based Technology and Energy, Korea Polytechnic University, Seoul, Republic of Korea

Introduction; 1 The EU's engagement in the Asia-Pacific; 2 The EU in the non-European world: The case of ASEAN and Myanmar; 3 The EU's engagement of Myanmar in security cooperation; 4 Myanmar broadens its foreign relations: The European Union; 5 European and Chinese development cooperation in the context of ASEAN: The case of Myanmar; 6 The Rohinya issue: Can the EU contribute to the solution?; 7 The EU and Myanmar in the post-2016 scenario: Setting a constructive tone for peace; Conclusion