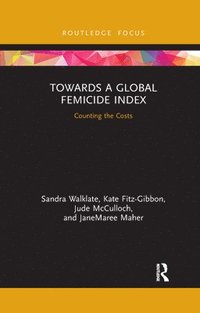 Towards a Global Femicide Index

av Sandra Walklate, Kate Fitz-Gibbon, Jude McCulloch, Janemaree Maher
Häftad Engelska, 2021-09-30
351
Köp
Spara som favorit
Finns även som
Visa alla 3 format & utgåvor
Increasingly there is global attention on the prevalence of women's deaths resulting from intimate partner violence. Campaigns such as 'Counting Dead Women' in Australia, the 'Femicide Census' in England, the Canadian Femicide Observatory, and the emergence of family violence death review teams globally, build on the work of agencies such as the United Nations and the World Health Organisation, highlighting the fatal consequences of intimate partner violence for women around the world. This book considers the need for and the steps to be taken towards creating a meaningful framework for a global index of women's deaths from intimate partner violence. While there are global indices for deaths that relate to public violence, such as terrorism, there is to date no systematic global count of killings of women by their intimate partners. It considers the possibilities and challenges that arise in counting intimate femicide. It argues that such an exercise needs to avoid narrow empiricism and instead be part of a broader feminist political project aimed at ending violence against women. This work will be of great interest to students and scholars of criminology, sociology, law, policing, and politics.
Visa hela texten

Professor Sandra Walklate is Eleanor Rathbone Chair of Sociology at the University of Liverpool (UK), Professor of Criminology at Monash University (Australia), and adjunct professor at QUT (Brisbane, Australia). Internationally recognised for her work in victimology and research on criminal victimization, her recent publications include: A Criminology of War? (2019, with R. McGarry); Crime and Emotions: Towards a Criminology of Emotions (2019, edited collection with M. Hviid-Jacobsen); and Intimate Partner Violence, Risk and Security (2018, edited with Kate Fitz-Gibbon, Jude McCulloch, and JaneMaree Maher). She is currently Editor-in-Chief of the British Journal of Criminology, and in 2014 she was given the British Society of Criminology's outstanding achievement award. Dr Kate Fitz-Gibbon is Senior Lecturer in Criminology in the School of Social Sciences at Monash University (Australia) and Lead Researcher in the Monash Gender and Family Violence Prevention Centre. Her research examines family violence, the law of homicide, and the impact of criminal law reform across Australian and international jurisdictions. This research has been undertaken with a focus on gender, responsibility, and justice. Dr Fitz-Gibbon has advised on homicide law and family violence reform in several Australian and international jurisdictions. Recent publications include Intimate Partner Violence, Risk and Security (2018, edited with Sandra Walklate, Jude McCulloch, and JaneMaree Maher); Homicide, Gender and Responsibility: An International Perspective (2016, edited with Sandra Walklate); Homicide Law Reform in Victoria: Retrospect and Prospects (2015, edited with Arie Freiberg); and Homicide Law Reform, Gender and the Provocation Defence (2014). Professor Jude McCulloch is a Professor of Criminology at Monash University (Australia) and the inaugural Director of the Monash Gender and Family Violence Prevention Centre. She leads a diverse research program on family violence prevention. Prior to her academic career, she worked in a women's refuge and as a community lawyer, providing legal assistance and support to women victims of crime as well as engaging in campaigns around gender and justice. The Australasian Council of Women and Policing awarded her the Griffith University Prize for excellence in research improving policing for women. Jude is an expert on risk, security, policing, and terrorism. Her current research compares responses to the risk of family violence and terrorism and the impacts of these different approaches on women's security. Professor JaneMaree Maher is Professor and Director of the Centre for Women's Studies and Gender Research Sociology at Monash University. She works on gendered violence and hate crimes using feminist legal paradigms. Her research more broadly addresses family and gender issues with a focus on women's caring and employment in family life. Recent book publications include Policing Hate Crime: Understanding Communities and Prejudice (2017, with G. Mason, J. Maher, J. McCulloch, S. Pickering, R. Wickes, and C. McKay) and Sex work: Labour, Mobility and Sexual Services (2013, with S. Pickering and A. Gerard).

1.Introduction: Setting the Scene 2.How do we count? Mapping global approaches to counting women's deaths 3.Trends in counting: What do the numbers mean? 4.Why counting matters - the opportunities and benefits of counting intimate femicide 5.The risks of counting the killing of women 6.Using data on intimate femicide to inform risk 7.Conclusion Looking to the future: from counting to preventing?