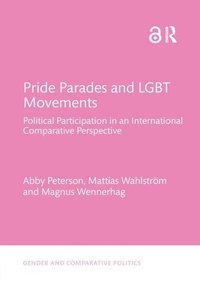 av Abby Peterson, Mattias Wahlstroem, Magnus Wennerhag
Häftad Engelska, 2022-07-12
609
Köp
Spara som favorit
Finns även som
Visa alla 3 format & utgåvor
The Open Access version of this book, available at http://www.tandfebooks.com/doi/view/10.4324/9781315474052, has been made available under a Creative Commons Attribution-Non Commercial-No Derivatives 4.0 license Today, Pride parades are staged in countries and localities across the globe, providing the most visible manifestations of lesbian, gay, bisexual, trans, queer and intersex movements and politics. Pride Parades and LGBT Movements contributes to a better understanding of LGBT protest dynamics through a comparative study of eleven Pride parades in seven European countries - Czech Republic, Italy, Netherlands, Poland, Sweden, Switzerland, the UK - and Mexico. Peterson, Wahlstroem and Wennerhag uncover the dynamics producing similarities and differences between Pride parades, using unique data from surveys of Pride participants and qualitative interviews with parade organizers and key LGBT activists. In addition to outlining the histories of Pride in the respective countries, the authors explore how the different political and cultural contexts influence: Who participates, in terms of socio-demographic characteristics and political orientations; what Pride parades mean for their participants; how participants were mobilized; how Pride organizers relate to allies and what strategies they employ for their performances of Pride. This book will be of interest to political scientists and sociologists with an interest in LGBT studies, social movements, comparative politics and political behavior and participation.
Visa hela texten

'Notwithstanding their relevance to the development of collective identities, as well as for the image and narrative of contentious politics, festivals or parades have not received much attention in social movement studies. This volume fills this gap through an in-depth comparative analysis of Pride Parades that uncovers the polyvocal manifestations of LGBT communities in different countries and periods. A brilliant contribution!' - Donatella della Porta, Director of Centre of Social Movements Studies, Scuola Normale Superiore, Italy 'Pride parades emerged across the globe as routine performances of LGBT collective identity. This book draws on survey and qualitative data to examine parades in seven European countries and Mexico. By exploring who participates and why, how participants are mobilized, and how the parades vary depending on political context, the authors argue that Pride parades are more than celebratory performances. Rather, they are highly political, challenging not only gender and cultural norms but also larger political conditions.' - Verta Taylor, Distinguished Professor of Sociology, University of California, Santa Barbara