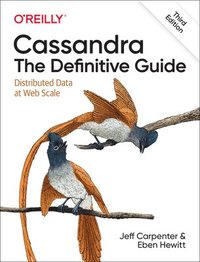 Jeff Carpenter is the Director of Developer Advocacy at DataStax, where he leverages his background in system architecture, microservices and Apache Cassandra to help empower developers and operations engineers to build distributed systems that are scalable, reliable, and secure. Jeff has worked on projects ranging from a complex battle planning system in an austere network environment, to a cloud-based hotel reservation system and is the author of Cassandra: The Definitive Guide, 2nd Edition. Eben Hewitt is the CTO and Chief Architect at Sabre Hospitality where he is responsible for the technology strategy and for designing large-scale, mission-critical systems and leading teams to build them. He has served as CTO at one of the world's largest hotel companies and CIO of O'Reilly Media. He has been a consultant to Warburg Pincus and others on distributed data and a frequent speaker at international conferences. He is the author of several books, including Technology Strategy Patterns (2018), Cassandra: The Definitive Guide, Java SOA Cookbook, and several other books on architecture, web and software development, including Semantic Software Design (2019). He's won several innovation awards for his software design work