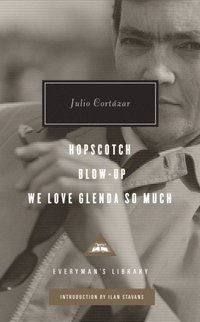 Hopscotch, Blow-Up, We Love Glenda So Much E-bok

av Julio Cortazar, Ilan Stavans
E-bok (EPUB - DRM), Engelska, 2016-04-20
109
Ladda ned
Spara som favorit
Laddas ned direkt
Läs i vår app för iPhone, iPad och Android
These three groundbreaking works by Julio Cortázar?a major figure of world literature and one of the founders of the Latin American Boom?are published together in one volume for the first time, in honor of the centenary of his birth.             With his influential ?counternovel? HOPSCOTCH and his unforgettable short stories, Cortázar earned a place among the most innovative authors of the twentieth century. HOPSCOTCH is a nonlinear novel about an Argentinean writer living in Paris; it consists of 155 short chapters that the author advises the reader to read out of order. BLOW-UP and WE LOVE GLENDA SO MUCH bring together the most famous of Cortázar?s short fiction, including ?Axolotl,? ?End of the Game,? ?The Night Face Up,? ?Continuity of Parks,? ?Bestiary,? and ?Blow-Up?. These are stories in which invisible beasts stalk children in their homes, the reader of a mystery finds out that he is the murderer?s intended victim, an injured motorcyclist is pursued by Aztec warriors, and a man becomes a salamander in a Parisian zoo. In Cortázar?s work, laws of nature, physics, and narrative fall away, leaving us with an astonishing new view of the world.
Visa hela texten