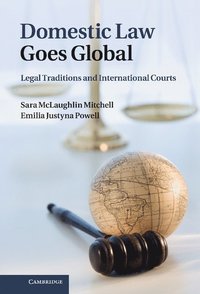 'This book is one of the few concrete manifestations of the multiple calls to marry social science methods and international relations scholarship with international legal study. Rather than philosophical analysis or normative statements, the authors provide causal arguments and back them up with systematic empirical evidence - a real advance in the field.' Paul F. Diehl, Henning Larsen Professor of Political Science, University of Illinois

'This is an exciting and original contribution to understanding ways that domestic politics and institutions influence international relations. Using lay language but rigorous methods, Mitchell and Powell show that states struggle to influence international legal institutions to reflect their own legal traditions. These scholars point out that modelling international courts on domestic legal systems serves to reduce the perceived uncertainty states face when they delegate adjudicative powers to such courts. Theirs is a new and powerful argument, and it will stimulate valuable debate about why it is that states prefer to create and join international institutions in their own image.' Beth A. Simmons, Clarence Dillon Professor of International Affairs, Harvard University