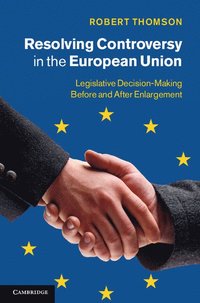 Resolving Controversy in the European Union

Legislative Decision-Making before and after Enlargement

av Robert Thomson
Inbunden Engelska, 2011-09-15
769
Köp
Spara som favorit
Finns även som
Visa alla 3 format & utgåvor
How does the EU resolve controversy when making laws that affect citizens? How has the EU been affected by the recent enlargements that brought its membership to a diverse group of twenty-seven countries? This book answers these questions with analyses of the EU's legislative system that include the roles played by the European Commission, European Parliament and member states' national governments in the Council of Ministers. Robert Thomson examines more than 300 controversial issues in the EU from the past decade and describes many cases of controversial decision-making as well as rigorous comparative analyses. The analyses test competing expectations regarding key aspects of the political system, including the policy demands made by different institutions and member states, the distributions of power among the institutions and member states, and the contents of decision outcomes. These analyses are also highly relevant to the EU's democratic deficit and various reform proposals.
Visa hela texten

Robert Thomson is a Senior Lecturer and Fellow at Trinity College, Dublin. He has been researching and teaching European Union politics since 1999. He is co-editor of The European Union Decides (Cambridge University Press, 2006) and twenty-five articles and book chapters on European politics. His work has appeared in political science journals including the British Journal of Political Science, the European Journal of Political Research and the Journal of Politics and he is one of the most highly cited political scientists based in Ireland. The author was awarded a Government of Ireland Fellowship for his research on EU politics. As well as academic research, he has conducted applied policy research for national governments and the European Commission. He is director of the MSc in Comparative European Politics at Trinity College Dublin and serves on the editorial board of the Journal of European Public Policy.