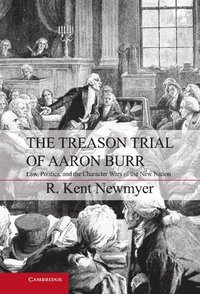 The Treason Trial of Aaron Burr

Law, Politics, and the Character Wars of the New Nation

av R Kent Newmyer
Inbunden Engelska, 2012-09-24
689
Köp
Spara som favorit
Finns även som
Visa alla 3 format & utgåvor
The Burr treason trial, one of the greatest criminal trials in American history, was significant for several reasons. The legal proceedings lasted seven months and featured some of the nation's best lawyers. It also pitted President Thomas Jefferson (who declared Burr guilty without the benefit of a trial and who masterminded the prosecution), Chief Justice John Marshall (who sat as a trial judge in the federal circuit court in Richmond) and former Vice President Aaron Burr (who was accused of planning to separate the western states from the Union) against each other. At issue, in addition to the life of Aaron Burr, were the rights of criminal defendants, the constitutional definition of treason and the meaning of separation of powers in the Constitution. Capturing the sheer drama of the long trial, Kent Newmyer's book sheds new light on the chaotic process by which lawyers, judges and politicians fashioned law for the new nation.
Visa hela texten

'The noted constitutional scholar R. Kent Newmyer's latest book illumines the ways 'law and politics were inseparably connected' in the 1807 treason trial of former vice president Aaron Burr, who was accused of attempting to take portions of the United States for his own ... Throughout the book Newmyer writes with authority, both relying on the words of the participants and drawing on his obvious mastery of the secondary literature on these three larger than life personalities.' Ronald L. Hatzenbuehler, Journal of American History

'... a fine addition to the Burr trial bookshelf.' Peter Charles Hoffer, The Journal of Southern History

'... a skilled and detailed recounting of Burr's trial, [this book] reveals a host of legal and political implications bound up in the trial and its outcome, and it is an entertainingly good read as well.' Joanne B. Freeman, Law and History Review

Kent Newmyer received his PhD in history from the University of Nebraska in 1959. From 1960 to 1997, he taught American history at the University of Connecticut. Since 1997, he has been Professor of Law and History at the University of Connecticut School of Law. He has taught a wide range of graduate and undergraduate courses in American history, specializing in the political, constitutional and legal history of the early national period. He received two awards for teaching and in 1988 was named Distinguished Alumni Professor for excellence in teaching and scholarship, the highest faculty honor bestowed by the university. As an author, Newmyer is best known for Supreme Court Justice Joseph Story: Statesman of the Old Republic (1985) and, most recently, John Marshall and the Heroic Age of the Supreme Court (2001). A second edition of his short volume on the Supreme Court under Marshall and Taney was published in 2006. Newmyer's books have been reviewed in various history journals and law reviews, as well as in The New York Times, the Washington Post and the New Republic. Newmyer has appeared on C-Span's 'Booknotes', and most recently was a commentator in a National Public Television documentary on the US Supreme Court, produced by Channel 13 in New York City.

1. Jefferson and Burr on the road to Richmond; 2. Jefferson and Marshall square off; 3. Legal theater in Richmond: Aaron Burr front and center; 4. Treason law for America: the lawyers grapple; 5. Judging the judge.