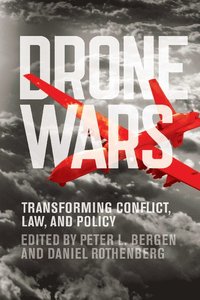 av Peter L Bergen
Inbunden Engelska, 2014-12-15
729
Köp
Spara som favorit
Skickas inom 10-15 vardagar.
Fri frakt inom Sverige för privatpersoner.
Finns även som
Visa alla 3 format & utgåvor
Drones are the iconic military technology of many of today's most pressing conflicts. Drones have captured the public imagination, partly because they project lethal force in a manner that challenges accepted norms and moral understandings. Drone Wars presents a series of essays by legal scholars, journalists, government officials, military analysts, social scientists, and foreign policy experts. It addresses drones' impact on the ground, how their use adheres to and challenges the laws of war, their relationship to complex policy challenges, and the ways they help us understand the future of war. The book is a diverse and comprehensive interdisciplinary perspective on drones that covers important debates on targeted killing and civilian casualties, presents key data on drone deployment, and offers new ideas on their historical development, significance, and impact on law and policy.
Visa hela texten

'An essential anthology delving into the raging debate over the use of drones in the endless war on terror, covering all the angles - political, legal, moral, military - with impressive scope and judicious balance.' Fred Kaplan, author of The Insurgents: David Petraeus and the Plot to Change the American Way of War

'No other advancement in military technology in recent years has provoked as many legal challenges and caused as much political furor as the advent of drone warfare. In this first of its kind book leading experts debate what drones have meant to fight against terrorism, America's moral authority and the stability of its relations with the Muslim world. Intelligent and incisive, this book is a must-read for academics and policy makers alike, as well as anyone interested in America's military and foreign policies.' Vali Nasr, Dean of The Paul H. Nitze School of Advanced International Studies, Johns Hopkins University and author of Dispensable Nation: American Foreign Policy in Retreat

'This is the best volume I have read on the nature of post-9/11 warfare. It is likely to become the standard book on 'the decade of the drone'.' Tom Ricks, Pulitzer Prize-winning journalist and author of Fiasco: The American Military Adventure in Iraq

'Drone Wars could not be more timely or more valuable. At a time when technology and strategy are transforming the means of warfare and possibly even the ends of war itself, a wide range of knowledgeable authors, many with direct experience of drone warfare, examine the implications of remotely piloted weapons from military, legal, political, ethical and cultural perspectives. That this volume raises more questions than it answers, at this moment in history, is precisely as it should be.' Anne-Marie Slaughter, President and CEO of New America and former Dean of the Woodrow Wilson School of Public and International Affairs, Princeton University

'... Drone Wars is an extensive anthology on the current debates surrounding the use of armed aerial drones in contemporary conflicts. The editors compiled a list of twenty-two essays and divided them into four major topic areas: drones on the ground, drones and the law of war, drones and policy, and drones and the future of war. Each topic area provides an in-depth view of the political, ethical, legal, and moral arguments surrounding the employment of armed drones. Contributing authors provide a wide array of opinions and observations detailing both the pros and cons of drone warfare. Many of the authors are subject matter experts in the fields of international law, policy, and strategy development. Others come from academia, media, government, and various think tanks from around the country. This impressive list helps to make the book an authoritative source on drone warfare.' Lt Col Andrew P. Creel, Military Review

'Drone Wars offers many new insights and approaches that are much needed in the drone debate. The book's essay structu...

Peter L. Bergen is a print, television, and web journalist; documentary producer; think tank director; and the author of four books about al-Qaeda, three of which were New York Times best sellers and three of which were named among the nonfiction books of the year by the Washington Post. He is the director of the national security program at the New America Foundation in Washington, DC; a Fellow at Fordham University's Center on National Security; and CNN's national security analyst. Daniel Rothenberg is Professor of Practice in the School of Politics and Global Studies and the Lincoln Fellow for Ethics and International Human Rights Law at Arizona State University. He was also the founding executive director of the Center for Law and Global Affairs at the Sandra Day O'Connor College of Law. From 2004 to 2010, he designed and managed human rights and rule-of-law projects in Afghanistan and Iraq. Rothenberg is the author and editor of several books and a frequent contributor on issues of international law, conflict, and global politics.

Part I. Drones on the Ground: 1. My guards absolutely feared drones: reflections on being held captive for seven months by the Taliban David Rohde; 2. The decade of the drone: analyzing CIA drone attacks, casualties, and policy Peter Bergen and Jennifer Rowland; 3. Just trust us: the need to know more about the civilian impact of US drone strikes Sarah Holewinski; 4. The boundaries of war?: Assessing the impact of drone strikes in Yemen Christopher Swift; 5. What do Pakistanis really think about drones? Saba Imtiaz; Part II. Drones and the Laws of War: 6. It is war at a very intimate level USAF pilot; 7. This is not war by machine Charles Blanchard; 8. Regulating drones: are targeted killings by drones outside traditional battlefields legal? William Banks; 9. A move within the shadows: will JSOC's control of drones improve policy? Naureen Shah; 10. Defending the drones: Harold Koh and the evolution of US policy Tara McKelvey; Part III. Drones and Policy Challenges: 11. 'Bring on the magic': using drones in combat Michael Waltz; 12. The five deadly flaws of talking about emerging military technologies and the need for new approaches to law, ethics, and war P. W. Singer; 13. Drones and cognitive dissonance Rosa Brooks; 14. Predator effect: a phenomenon unique to the war on terror Meg Braun; 15. Disciplining drone strikes: just war in the context of counterterrorism David True; 16. World of drones: the global proliferation of drone technology Peter Bergen and Jennifer Rowland; Part IV. Drones and the Future of Warfare: 17. No one feels safe Adam Khan; 18. 'Drones' now and what to expect over the next ten years Werner Dahm; 19. From Orville Wright to September 11: what the history of drone technology says about the future Konstantin Kakaes; 20. Drones and the dilemma of modern warfare Richard Pildes and Samuel Issacharoff; 21. How to manage drones, transformative technologies, the evolving nature of conflict and the inadequacy of current systems of law Brad Allenby; 22. Drones and the emergence of data-driven warfare Daniel Rothenberg.