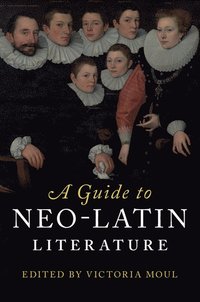 A Guide to Neo-Latin Literature

av Victoria Moul
Inbunden Engelska, 2017-01-16
899
Köp
Spara som favorit
Skickas inom 10-15 vardagar.
Fri frakt inom Sverige för privatpersoner.
Finns även som
Visa alla 3 format & utgåvor
Latin was for many centuries the common literary language of Europe, and Latin literature of immense range, stylistic power and social and political significance was produced throughout Europe and beyond from the time of Petrarch (c.1400) well into the eighteenth century. This is the first available work devoted specifically to the enormous wealth and variety of neo-Latin literature, and offers both essential background to the understanding of this material and sixteen chapters by leading scholars which are devoted to individual forms. Each contributor relates a wide range of fascinating but now little-known texts to the handful of more familiar Latin works of the period, such as Thomas More's Utopia, Milton's Latin poetry and the works of Petrarch and Erasmus. All Latin is translated throughout the volume.
Visa hela texten

Victoria Moul is Senior Lecturer in Latin Language and Literature at King's College London. She is a leader in the field of early modern Latin and English literature, with wide-ranging publications including articles on neo-Latin elegy, lyric and didactic poetry and Milton, Jonson, Donne and Cowley, as well as the reception of Horace, Pindar and Virgil. Her previous publications include Jonson, Horace, and the Classical Tradition (Cambridge, 2010) and a translation of George Herbert's complete Latin poetry with introduction and notes, George Herbert: Complete Poems (2015, edited with John Drury). She is working on an anthology of neo-Latin verse, with commentary, and on a major book on the interaction between neo-Latin and English poetry in Britain from 1550 to 1700.