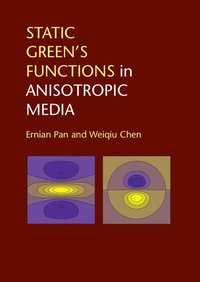 av Ernian Pan
Inbunden Engelska, 2015-04-30
989
Köp
Spara som favorit
Skickas inom 10-15 vardagar.
Fri frakt inom Sverige för privatpersoner.
Finns även som
Visa alla 2 format & utgåvor
This book presents basic theory on static Green's functions in general anisotropic magnetoelectroelastic media including detailed derivations based on the complex variable method, potential method, and integral transforms. Green's functions corresponding to the reduced cases are also presented including those in anisotropic and transversely isotropic piezoelectric and piezomagnetic media, and in purely anisotropic elastic, transversely isotropic elastic and isotropic elastic media. Problems include those in three-dimensional, (two-dimensional) infinite, half, and biomaterial spaces (planes). While the emphasis is on the Green's functions related to the line and point force, those corresponding to the important line and point dislocation are also provided and discussed. This book provides a comprehensive derivation and collection of the Green's functions in the concerned media, and as such, it is an ideal reference book for researchers and engineers, and a textbook for both students in engineering and applied mathematics.
Visa hela texten

Ernian Pan is a Professor of Civil Engineering at the University of Akron and a Fellow of both ASME and ASCE. He received his BS from Lanzhou University, his MS from Peking University, and his PhD from the University of Colorado, Boulder. His research interests are in computational mechanics with applications to anisotropic magnetoelectroelastic solids and nanostructures. As a well-recognized expert in anisotropic and multilayered Green's functions, he has pioneered various benchmark solutions for multiphase and multilayered composites with functionally graded materials and played various active roles in, and contributed to, Green's function research and education. He has published more than 250 journal articles. Weiqiu Chen is a Professor of Engineering Mechanics at Zhejiang University, China. He received his BS and PhD degrees from Zhejiang University in 1990 and 1996, respectively. He has engaged himself in the mechanics of smart materials/structures and vibrations/waves in structures for more than twenty years. He has co-authored more than 300 peer-reviewed journal articles, and he has published two books on the elasticity of transversely isotropic elastic and piezoelectric solids in 2006 and 2001, respectively. He has received numerous awards, including the National Science Fund for Excellent Young Scholars from the NSFC in 2007 and the Award of Science and Technology (the second grade) from the Ministry of Education, China, in 2012.