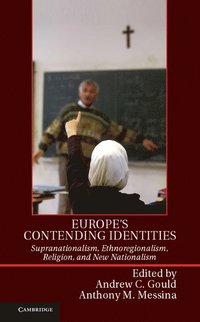 av Andrew C Gould
Inbunden Engelska, 2014-02-17
1139
Köp
Spara som favorit
Skickas inom 5-8 vardagar.
Fri frakt inom Sverige för privatpersoner.
Finns även som
Visa alla 2 format & utgåvor
How 'European' are Europeans? Is it possible to balance national citizenship with belonging to the European Union overall? Do feelings of citizenship and belonging respond to affiliations to regions, religions or reactionary politics? Unlike previous volumes about identity in Europe, this book offers a more comprehensive view of the range of identities and new arguments about the political processes that shape identity formation. The founders of European integration promised 'an ever closer union'. Nationalists respond that a people should control their own destiny. This book investigates who is winning the debate. The chapters show that attitudes toward broader political communities are changing, that new ideas are gaining ground, and that long-standing trends are possibly reversing course.
Visa hela texten

Andrew C. Gould is an Associate Professor of Political Science at the University of Notre Dame. He is the author of Origins of Liberal Dominance: State, Church, and Party in Nineteenth-Century Europe (1999). His articles have been published in West European Politics, The Annual Review of Political Science, Studies in Comparative International Development, and The Review of Politics. Prior to his time at the University of Notre Dame, Professor Gould taught at the University of Washington. Anthony M. Messina is the John R. Reitemeyer Professor of Politics at Trinity College in Hartford, CT. He is the author of Race and Party Competition in Britain (1989) and The Logics and Politics of Post-World War II Migration to Western Europe (Cambridge University Press, 2007), and the editor or co-editor of Ethnic and Racial Minorities in the Advanced Industrial Democracies (1992), West European Immigration and Immigrant Policy in the New Century (2002), The Migration Reader (2006), and The Year of the Euro: The Social and Political Import of Europe's Common Currency (2006). Before arriving at Trinity College, Professor Messina taught at Tufts University and the University of Notre Dame; the latter recognized him with a distinguished teaching award in 2005.