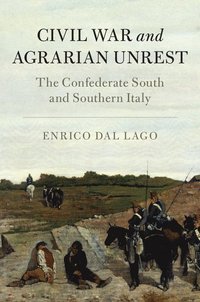 The Confederate South and Southern Italy

av Enrico Dal Lago
Inbunden Engelska, 2018-03-15
529
Köp
Spara som favorit
Finns även som
Visa alla 2 format & utgåvor
Between 1861 and 1865, both the Confederate South and Southern Italy underwent dramatic processes of nation-building, with the creation of the Confederate States of America and the Kingdom of Italy, in the midst of civil wars. This is the first book that compares these parallel developments by focusing on the Unionist and pro-Bourbon political forces that opposed the two new nations in inner civil conflicts. Overlapping these conflicts were the social revolutions triggered by the rebellions of American slaves and Southern Italian peasants against the slaveholding and landowning elites. Utilizing a comparative perspective, Enrico Dal Lago sheds light on the reasons why these combined factors of internal opposition proved fatal for the Confederacy in the American Civil War, while the Italian Kingdom survived its own civil war. At the heart of this comparison is a desire to understand how and why nineteenth-century nations rose and either endured or disappeared.
Visa hela texten

'Enrico Dal Lago recounts in compelling detail and with analytic precision the simultaneous civil wars that unfolded in the United States and Italy in 1861-65. This is comparative history at its best, as parallel histories intersect, shedding new light on the freedom struggles of American slaves and Italian peasants, as well as on the nation-building projects of elites in both countries. There is no historian writing today who approaches the past like Enrico Dal Lago.' Andrew Zimmerman, George Washington University, Washington, DC

'Enrico Dal Lago, the distinguished scholar of comparative and international history, has given us a remarkable and thought-provoking work. Putting the American Civil War and the Italian Great Brigandage into relation raises important new questions about each while summoning us to place both events into a global context of state-building, agrarian unrest, and social revolution. Dal Lago's book exemplifies social and political history at its best.' Steven Hahn, New York University

'This is a groundbreaking work. Dal Lago has gained a reputation as a consummate comparatist of slavery and other systems of agrarian labor in the modern world. This study of the inner civil wars that wracked the American and Italian Souths in the 1860s will find an appreciative audience among historians of Italy and the USA, but equally with historians, sociologists and anthropologists of systems of sharecropping, landless laborers, and agrarian unfree labor. Dal Lago has mastered the vast secondary literature, presents an original methodological approach, and has delved deeply into the archives of his case studies. This book is a marvel.' Carl Levy, University of London

'This is an important contribution to the study of rural unrest and violence in a comparative perspective. Dal Lago's mastery of a wide range of sources and related scholarly debates are awe-inspiring, and his innovative approach makes us think in new ways about issues such as race, class and the role of the state in nation-building.' Eugenio Biagini, Sidney Sussex College Cambridge

'... this important new contribution revamps some of the well-known debates on the role that agriculture, lords and peasants, and agrarian social revolutions played in the shaping of the modern world ...' Marta Petrusewicz, The American Historical Review

'In this book Enrico Dal Lago explores the remarkable parallels between the Confederate experience and events in southern Italy.' Paul D. Escott, The Journal of American History

'Dal Lago has drawn on an impressive range of American and Italian manuscript collections, archives, printed primary sources. Moreover, the book's conclusions incorporate the ndings of the latest published scholarship by leading Anglo-American and Italian historians in the eld.' Anthony L. Cardoza, The Journal of Modern History

Enrico Dal Lago is Professor of History at the National University of Ireland, Galway. He holds a Ph.D. in History from University College London. He is the author of several books, including Agrarian Elites: American Slaveholders and Southern Italian Landowners, 1815-1861 (2005), and William Lloyd Garrison and Giuseppe Mazzini: Abolition, Democracy, and Radical Reform (2013).