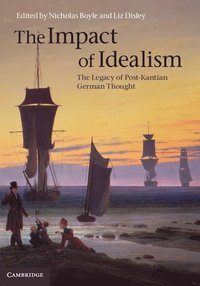 The Impact of Idealism 4 Volume Set

The Legacy of Post-Kantian German Thought

av Nicholas Boyle
Multiple copy pack Engelska, 2013-11-21
4039
Köp
Spara som favorit
Skickas inom 5-8 vardagar.
Fri frakt inom Sverige för privatpersoner.
German Idealism is arguably the most influential force in philosophy over the past two hundred years. This major four-volume work is the first comprehensive survey of its impact on science, religion, sociology and the humanities, and brings together fifty-two leading scholars from across Europe and North America. Each essay discusses an idea or theme from Kant, Hegel, Schelling, Fichte, or another key figure, shows how this influenced a thinker or field of study in the subsequent two centuries, and how that influence is felt in contemporary thought. Crossing established scholarly divides, the volumes deal with fields as varied as feminism, architectural history, psychoanalysis, Christology and museum curation, and subjects as diverse as love, evolution, the public sphere, the art of Andy Warhol, the music of Palestrina, the philosophy of Husserl, the literature of Jane Austen, the political thought of fascism and the foundations of international law.
Visa hela texten

'This unprecedented collection by scholars from the UK, US, and Europe chronicles the rise of German Idealism and reveals its enduring influence on virtually every area of modern thought and action from philosophy to science, society and politics, the practice, criticism, and theory of the arts, and religion.' Paul Guyer, University of Pennsylvania

'The Impact of Idealism is a monumental achievement, a bold attempt to fathom the legacy of German idealism in every sphere of culture. The extent and the depth of the enterprise, in its four volumes, is staggering. Nothing like it has been done before, and it is unlikely that anything like it will ever be attempted again. It is the product of an impressive array of scholars, virtually everyone who is anyone in the field. It is sure to be the standard work on the subject. Anyone whose work touches on German idealism, which is almost all of us, will need to read it.' Frederick Beiser, Syracuse University

'The final outcome of an 'international research network' carried out under the overall direction of the great Goethe biographer, Nicholas Boyle.' The Times Literary Supplement

Volume 1. Philosophy and Science: The impact of idealism: a historical introduction; Foreword; Introduction: idealism in natural sciences and philosophy; 1. Philosophy of natural science in idealism and neo-Kantianism; 2. The impact of German Idealism and romanticism on biology in the nineteenth century; 3. The unconscious: transcendental origins, idealist metaphysics and psychoanalytic metapsychology; 4. Nietzsche, Kant and teleology; 5. Transcendental idealism, phenomenology and the metaphysics of intentionality; 6. Heidegger and the impact of idealism; 7. French Hegelianism and anti-Hegelianism in the 1960s: Hyppolite, Foucault and Deleuze; 8. Scottish idealism; 9. 'My station and its duties': social-role accounts of obligation in Green and Bradley; 10. Idealism and the origin of analytic philosophy; 11. Idealism and pragmatism: the inheritance of Hegel's concept of experience; 12. Reason's form. Volume 2. Historical, Social and Political Theory: Introduction: idealism in historical, social and political thought; 1. From transcendental idealism to political realism; 2. The public of the intellectuals - from Kant to Lyotard; 3. Idealism and the idea of a constitution; 4. German Idealism and Marx; 5. Ethos, nature and education in Johann Erich von Berger and Friedrich Adolf Trendelenburg; 6. The concept of philosophy of culture in neo-Kantianism; 7. After materialism. Reflections of idealism in Lebensphilosophie: Dilthey, Bergson and Simmel; 8. 'Rationalisation', 'reification', 'instrumental reason'; 9. Freedom within nature: Adorno on the idea of reason's autonomy; 10. German neo-Hegelianism and the plea for another Hegel; 11. Idealism and the fascist corporative state; 12. Love and recognition in Fichte, Hegel, and Simone de Beauvoir; 13. Giving an account of oneself amongst others: Hegel, Judith Butler and social ontology; 14. Idealism in the German tradition of meta-history. Volume 3. Aesthetics, Literature and Literary Theory: Introduction: idealism in aesthetics and literature; 1. The legacy of idealism and the rise of academic aesthetics; 2. Hegel's philosophical theory of action: the concept of action in Hegel's practical philosophy and aesthetics; 3. Tragedy and the human image: German Idealism's legacy for theory and practice; 4. Romanticism as literary idealism, or: a 200 year-old way of talking about literature; 5. Idealism in nineteenth-century German literature; 6. Idealism in nineteenth-century British and American literature; 7. Elements of Schopenhauer's thought in Beckett; 8. German Idealism and the philosophy of music; 9. The music of German Idealism; 10. 'Refiner of all human relations' - Karl Friedrich Schinkel as an idealist theorist; 11. Influences of German Idealism on nineteenth-century architectural theory: Schelling and Leo von Klenze; 12. 'Making a world': the impact of idealism on museum formation in mid-nineteenth-century Massachusetts; 13. Hegel, Danto and the 'end of art'. Volume 4. Religion: Introduction: the imp...