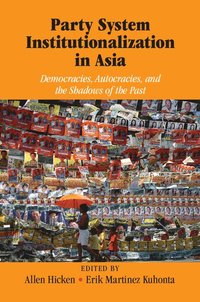 Democracies, Autocracies, and the Shadows of the Past

av Allen Hicken
Inbunden Engelska, 2014-12-29
689
Köp
Spara som favorit
Finns även som
Visa alla 3 format & utgåvor
This book provides a comprehensive empirical and theoretical analysis of the development of parties and party systems in Asia. The studies included advance a unique perspective in the literature by focusing on the concept of institutionalization and by analyzing parties in democratic settings as well as in authoritarian settings. The countries covered in the book range from East Asia to Southeast Asia to South Asia.
Visa hela texten

'Asian cases have too often been overlooked by scholars of parties and party systems. Hicken and Kuhonta's superbly edited volume not only moves Asia to center stage, but makes a theoretical contribution in its own right. Their key argument - rooted in history - that authoritarianism begets institutionalization represents a major challenge to established political science theory.' Benjamin Reilly, Dean, Sir Walter Murdoch School of Public Policy and International Affairs, Murdoch University, Western Australia

'Party System Institutionalization in Asia provides an extensive empirical assessment in twelve country chapters, along with a coherent and significant argument that tracks the legacies of authoritarian constraints on party formation, internal organization, and dominant strategies. It extends the emerging movement of historical institutionalism in the study of political party systems by highlighting the possibility for institutionalized parties to endure despite changes in regime and their sustained impact in structuring the party system over the long-term.' Rachel Beatty Riedl, Northwestern University

'Editing a book on political parties in Asia is an ambitious task due to the sheer breadth of regime types, levels of institutionalization, and background conditions in the region. Allen Hicken and Erik Kuhonta have succeeded in assembling a talented set of contributors to produce a book that is impressive in both its theoretical coherence and its attention to particular cases. Moreover, the book's span across democracies and autocracies and its close attention to the historical roots of contemporary parties make it an important contribution to our comparative understanding of political parties and party systems globally.' Benjamin Smith, University of Florida Research Foundation Professor, University of Florida

' ... the country studies of political parties in the Asian region will be useful for readers, especially as there is a theoretical coherence to the chapters ... [which] are likely to be of great interest to party institutionalization aficionados while adding Asian cases to a theoretical literature dominated by Europe and Latin America is as necessary as it is welcome.' Kevin Hewison, Southeast Asian Studies

'In Party System Institutionalization in Asia, Allen Hicken and Erik Kuhonta assemble an impressive series of chapters with a quality and analytical coherence that is difficult to achieve in an edited volume. ... This is a worthwhile volume, containing chapters that can be assigned in class as standalone pieces while reaching a level of rigour that will inform future research.' Nathan Allen, Pacific Affairs