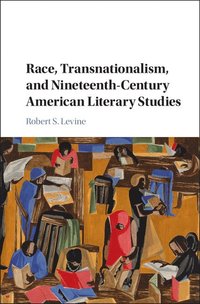 'The breadth and depth of knowledge in this collection of essays is astonishing. The accumulation of brilliant readings, with topics ranging from James Fenimore Cooper's works to Hurricane Katrina, illustrates yet again the centrality and importance of Robert S. Levine's work to American literary studies.' Cindy Weinstein, Eli and Edythe Broad Professor of English, Vice Provost, California Institue of Technology

'Robert S. Levine is one of our leading Americanists and these essays reveal why. Uniting beautiful close readings with brilliant historical analyses, they should be required reading for anyone interested in American culture or cultural criticism at its most exciting.' John Stauffer, Sumner R. and Marshall S. Kates Professor of English and of African and African American Studies, Harvard University

'With typical cogency and a mastery of nineteenth-century American literary history, Robert S. Levine presents, in revised form, a series of essays that have helped to reshape the field over the past quarter century. The individual essays are impressive, taking up European American and African American literatures, advancing our understanding of nineteenth-century debates about race, nation, empire, temporality, and aesthetics, and showing the importance of these debates for the present. Taken together, the ten essays offer a model for articulating literature and history that preserves the complexities in both fields, and they make an eloquent case for authorial intention and critical agency.' Samuel Otter, University of California, Berkeley

Robert S. Levine is Distinguished University Professor of English at the University of Maryland, College Park. He is the author of Conspiracy and Romance (Cambridge, 1989), Martin Delany, Frederick Douglass, and the Politics of Representative Identity (1997), Dislocating Race and Nation (2008), and The Lives of Frederick Douglass (2016), and the editor of over twenty volumes, He is the General Editor of The Norton Anthology of American Literature. Levine has received fellowships from the National Endowment for the Humanities (NEH) and the Guggenheim Foundation. In 2014, the American Literature Section of the Modern Language Association awarded him the Hubbell Medal for Lifetime Achievement in American Literary Studies.

Introduction; 1. Reading slavery and race in 'classic' American literature; 2. Temporality, race, and empire in Cooper's The Deerslayer: the beginning of the end; 3. Fifth of July: Nathaniel Paul and the circulatory routes of black nationalism; 4. American studies in an age of extinction: Poe, Hawthorne, Katrina; 5. The slave narrative and the revolutionary tradition of African American autobiography; 6. 'Whiskey, blacking, and all': temperance and race in William Wells Brown's Clotel; 7. Beautiful warships: the transnational aesthetics of Melville's Israel Potter; 8. Antebellum Rome: transatlantic mirrors in Hawthorne's The Marble Faun; 9. Edward Everett Hale's and Sutton E. Griggs's Men without a Country; 10. Frederick Douglass in fiction: from Harriet Beecher Stowe to James McBride; Notes.