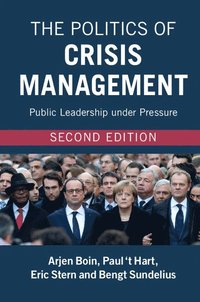 The Politics of Crisis Management

av Arjen Boin
Inbunden Engelska, 2016-12-01
589
Köp
Spara som favorit
Skickas inom 10-15 vardagar.
Fri frakt inom Sverige för privatpersoner.
Finns även som
Visa alla 5 format & utgåvor
Crisis management has become a defining feature of contemporary governance. In times of crisis, communities and members of organizations expect their leaders to minimize the impact, while critics and bureaucratic competitors make use of social media to blame incumbent rulers and their policies. In this extreme environment, policymakers must somehow establish a sense of normality, and foster collective learning from the crisis experience. In the new edition of this uniquely comprehensive analysis, the authors examine how strategic leaders deal with the challenges they face, the political risks and opportunities they encounter, the pitfalls they must avoid, and the paths towards reform they may pursue. The book is grounded in decades of collaborative, cross-national and multidisciplinary case study research and has been updated to include new insights and examples from the last decade. This is an original and important contribution from experts in public policy and international security.
Visa hela texten