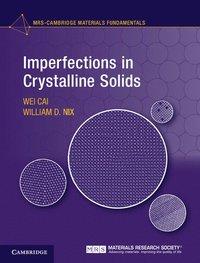 av Wei Cai
Inbunden Engelska, 2016-09-15
539
Köp
Spara som favorit
Skickas inom 10-15 vardagar.
Fri frakt inom Sverige för privatpersoner.
Finns även som
Visa alla 2 format & utgåvor
This textbook provides students with a complete working knowledge of the properties of imperfections in crystalline solids. Readers will learn how to apply the fundamental principles of mechanics and thermodynamics to defect properties in materials science, gaining all the knowledge and tools needed to put this into practice in their own research. Beginning with an introduction to defects and a brief review of basic elasticity theory and statistical thermodynamics, the authors go on to guide the reader in a step-by-step way through point, line, and planar defects, with an emphasis on their structural, thermodynamic, and kinetic properties. Numerous end-of-chapter exercises enable students to put their knowledge into practice, and with solutions for instructors and MATLAB programs available online, this is an essential text for advanced undergraduate and introductory graduate courses in crystal defects, as well as being ideal for self-study.
Visa hela texten

Wei Cai is an Associate Professor in the Department of Mechanical Engineering at Stanford University, California. He received the Presidential Early Career Award for Scientists and Engineers in 2004, the American Society of Engineering Education Beer and Johnston New Mechanics Educator Award in 2009, and the American Society of Mechanical Engineers Hughes Young Investigator Award in 2013. William D. Nix has been teaching courses on imperfections in crystalline solids at Stanford University, California for more than 50 years. His teaching awards include the Bradley Stoughton Award for Young Teachers of Metallurgy, the Albert Easton White Distinguished Teacher Award, and the Educator Award from the Metallurgical Society. He has also received many awards for his research and is a Fellow of the American Academy of Arts and Sciences and a member of both the National Academy of Engineering and the National Academy of Sciences.