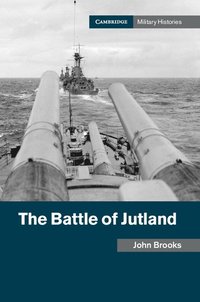 The Battle of Jutland

av John Brooks
Inbunden Engelska, 2016-05-09
439
Köp
Spara som favorit
Finns även som
Visa alla 3 format & utgåvor
This is a major new account of the Battle of Jutland, the key naval battle of the First World War in which the British Grand Fleet engaged the German High Seas Fleet off the coast of Denmark in 1916. Beginning with the building of the two fleets, John Brooks reveals the key technologies employed, from ammunition, gunnery and fire control, to signalling and torpedoes, as well as the opposing commanders' tactical expectations and battle orders. In describing Jutland's five major phases, he offers important new interpretations of the battle itself and how the outcome was influenced by technology, as well as the tactics and leadership of the principal commanders, with the reliability of their own accounts of the fighting reassessed. The book draws on contemporary sources which have rarely been cited in previous accounts, including the despatches of both the British and German formations, along with official records, letters and memoirs.
Visa hela texten

'At the centenary of Jutland, the most controversial of all naval battles, John Brooks' skilful, precise assessment, a masterclass in naval operational history, provides a new benchmark, the foundation text for all future studies.' Andrew Lambert, author of The Challenge: Britain against America in the Naval War of 1812

'A key element [of this book] is the careful examination of the ferocious but chaotic night actions which were so important to the final outcome. The difficulties of operating at night, the preparations, material and doctrinal, of both sides and the uncertainties which so often meant the difference between success and disaster are made clear, allowing a much more comprehensive assessment of what was inevitable and what might have been.' James Goldrick, author of Before Jutland: The Naval War in Northern European Waters, August 1914-February 1915

'To sum up, John Brooks's book is one of the best written on this battle. Of course, we do not learn anything about the situation on board during the battle, the horror of fighting and dying as well as the myth of Jutland both in Britain and in Germany. However, the author should not be blamed for this, for his topic was different - he wanted to give a true account of a great battle - no more, but also no less. He has achieved this aim marvelously.' Michael Epkenhans, The International Journal of Maritime History

John Brooks read Natural and Electrical Sciences at St John's College, Cambridge, before pursuing an industrial career in computing and telecommunications. After the publication of his first historical paper on circular dividing engines in 1992, Dr Brooks joined the Department of War Studies at King's College London. His 2001 doctoral thesis was the basis of his book Dreadnought Gunnery and the Battle of Jutland: The Question of Fire Control (2005), which was the first work to challenge the then widely accepted views of 'revisionist' naval historians. Dr Brooks has also published articles on naval fire control, ordnance, policy and tactics, as well as articles for the Oxford Dictionary of National Biography.

1. Building the battlefleets; 2. Technologies; 3. Orders for battle; 4. Preliminaries; 5. The run to the south; 6. The run to the north; 7. Around windy corner; 8. The remains of the day; 9. Night and morning; 10. Technology and tactics; 11. An unpalatable result; Bibliography; Index.