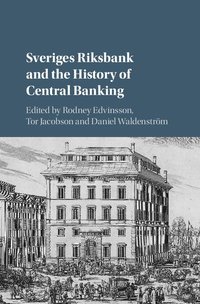 Sveriges Riksbank and the History of Central Banking

av Rodney Edvinsson
Inbunden Engelska, 2018-05-24
939
Köp
Spara som favorit
Finns även som
Visa alla 2 format & utgåvor
Written in celebration of its 350th anniversary in 2018, this book details the history of the central bank of Sweden, Sveriges Riksbank, as presented by Klas Fregert. It relates the bank's history to the development of other major central banks around the world. Chapters are written by some of the more prominent scholars in the field of monetary economics and economic history. These chapters include an analysis of the Bank of England written by Charles Goodhart; the evolution of banking in America, written by Barry Eichengreen; a first account of the People's Bank of China, written by Franklin Allen, Xian Gu, and Jun Qian; as well as a chapter about the brief but important history of the European Central Bank, written by Otmar Issing.
Visa hela texten

Rodney Edvinsson is Associate Professor and Senior Lecturer in Economic History at the Stockholms Universitet, where he also received his Ph.D., in 2005. He is also Pro Futura Fellow at the Swedish Collegium of Advanced Study. His main research interests include long-term economic growth, historical national accounts and monetary history. Tor Jacobson is an economist with the central bank of Sweden, Sveriges Riksbank. He received a Ph.D. in statistics at Uppsala Universitet, Sweden. Tor Jacobson's research interests include econometrics, empirical macro, banking, and empirical micro applications. Daniel Waldenstrm is a professor of economics at the Research Institute of Industrial Economics, IFN, and visiting professor at the Paris School of Economics. He received a Ph.D. in economics from the Stockholm School of Economics and a Ph.D. in economic history from Lunds Universitet.