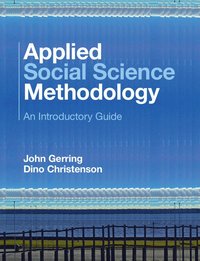 'An excellent guide to the main approaches and issues of social science research design. It offers a clear guide through the thicket of terms and concepts with effective use of examples. A valuable work for students of any level.' Kenneth Benoit, London School of Economics and Political Science 'Rich, compelling, engaging, passionate and in crystal-clear style. Gerring and Christenson have done an excellent job in promoting an integrated and pluralist vision of methodology and research design.' Martino Maggetti, University of Lausanne, Switzerland

John Gerring is Professor of Government at the University of Texas, Austin. He is the author of several books, including Social Science Methodology: A Unified Framework, 2nd edition (Cambridge, 2012) and Case Study Research: Principles and Practices, 2nd edition (Cambridge, forthcoming, 2017). He is also co-editor of the Cambridge series, Strategies for Social Inquiry. Dino Christenson is Associate Professor of Political Science at Boston University and a Faculty Affiliate at the Rafik B. Hariri Institute for Computing and Computational Science and Engineering at Boston University. His articles have appeared in the American Political Science Review, the American Journal of Political Science, Political Behavior and Social Networks, among other publications.