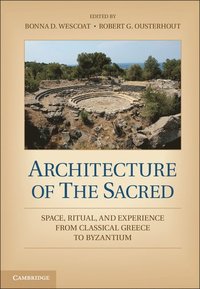 Architecture of the Sacred

Space, Ritual, and Experience from Classical Greece to Byzantium

'... this is an outstanding collection of essays, or 'micro-histories', as the editors note, providing both breadth and specificity in its examination of the complex problem of architecture, space, and ritual.' Jessica Paga, Journal of the Society of Architectural Historians

Bonna D. Wescoat is Associate Professor of Art History at Emory University, Atlanta and Director of the Institute of Fine Arts excavations at the Sanctuary of the Great Gods, Samothrace, Greece. Her research concentrates on ancient Greek sacred architecture and iconography. Recent works include The Temple of Athena at Assos (2012) and The Monuments of the Eastern Hill (Samothrace) (2015). Robert G. Ousterhout is Professor of the History of Art at the University of Pennsylvania, where he directs the Center for Ancient Studies. A specialist in Byzantine art and architecture, his research focuses on the vanishing architectural heritage of the Eastern Mediterranean. He is the author of numerous books, including Master Builders of Byzantium, 2nd edition (2008), The Byzantine Monuments of the Evros/Meric River Valley (2007, with Ch. Bakirtzis), and A Byzantine Settlement in Cappadocia, 2nd edition (2011).

Preface Robert G. Ousterhout and Bonna D. Wescoat; 1. Material culture and ritual: state of the question Ja Elsner; 2. Monumental steps and the shaping of ceremony Mary B. Hollinshead; 3. Coming and going in the sanctuary of the great gods, Samothrace Bonna D. Wescoat; 4. Gateways to the mysteries: the Roman propylon and in the City Eleusinion Margaret M. Miles; 5. Architecture and ritual in Ilion, Athens, and Rome C. Brian Rose; 6. The same, but different: the temple of Jupiter Optimus Maximus through time Ellen Perry; 7. Mapping sacrifice on bodies and spaces in ancient Judaism and early Christianity Joan Branham; 8. The 'foundation deposit' from the Dura Europos Synagogue reconsidered Jodi Magness; 9. Sight lines of sanctity at Late Antique Martyria Ann Marie Yasin; 10. The sanctity of place and the sanctity of buildings: Jerusalem vs Constantinople Robert G. Ousterhout; 11. Divine light: constructing the immaterial in Byzantine art and architecture Slobodan uri; 12. Architecture as a definer of sanctity in the monastery tou Libos in Constantinople Vasileios Marinis; Afterword Bonna D. Wescoat and Robert G. Ousterhout.