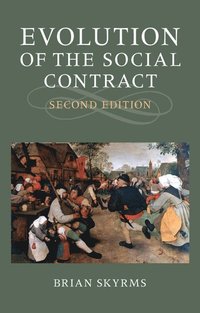 Evolution of the Social Contract

av Brian Skyrms
Häftad Engelska, 2014-10-30
190
Köp
Spara som favorit
Finns även som
Visa alla 3 format & utgåvor
In this new edition of Evolution of the Social Contract, Brian Skyrms uses evolutionary game theory to analyze the genesis of social contracts and investigates social phenomena including justice, communication, altruism, and bargaining. Featuring new material on evolution and information transfer, and including recent developments in game theory and evolution literature, his book introduces and applies appropriate concepts of equilibrium and evolutionary dynamics, showing how key issues can be modeled as games and considering the ways in which evolution sometimes supports, and sometimes does not support, rational choice. He discusses topics including how bargaining with neighbors promotes sharing of resources, the diversity of behavior in ultimatum bargaining in small societies, the Prisoner's Dilemma, and an investigation into signaling games and the spontaneous emergence of meaningful communication. His book will be of great interest to readers in philosophy of science, social science, evolutionary biology, game and decision theory, and political theory.
Visa hela texten

'This second edition is an important update of Brian Skyrms' important book. Game theorists in evolutionary biology, economics and philosophy will continue to profit from, and enjoy, Skyrms' groundbreaking work.' Elliott Sober, University of Wisconsin, Madison

Brian Skyrms is Distinguished Professor of Logic and Philosophy of Science and of Economics at the University of California, Irvine and Professor of Philosophy at Stanford University, California. His publications include The Stag Hunt and the Evolution of Social Structure (Cambridge, 2004), Signals: Evolution, Learning, and Information (2010), From Zeno to Arbitrage: Essays on Quantity, Coherence, and Induction (2012) and Evolution of the Social Contract (Cambridge, 1996), which won the 1999 Lakatos Award in Philosophy of Science.