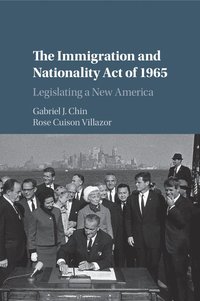 The Immigration and Nationality Act of 1965

av Gabriel J Chin
Häftad Engelska, 2018-03-15
259
Köp
Spara som favorit
Skickas inom 7-10 vardagar.
Fri frakt inom Sverige för privatpersoner.
Finns även som
Visa alla 3 format & utgåvor
Along with the civil rights and voting rights acts, the Immigration and Nationality Act of 1965 is one of the most important bills of the civil rights era. The Act's political, legal, and demographic impact continues to be felt, yet its legacy is controversial. The 1965 Act was groundbreaking in eliminating the white America immigration policy in place since 1790, ending Asian exclusion, and limiting discrimination against Eastern European Catholics and Jews. At the same time, the Act discriminated against gay men and lesbians, tied refugee status to Cold War political interests, and shattered traditional patterns of Mexican migration, setting the stage for current immigration politics. Drawing from studies in law, political science, anthropology, and economics, this book will be an essential tool for any scholar or student interested in immigration law.
Visa hela texten

Gabriel J. Chin is a 'paper grandson', a descendant of an unauthorized migrant during Chinese Exclusion. Author of many articles on Asian American legal history, he is co-editor of Strange Neighbors: The Role of States in Immigration Policy (2014), addressing recent state immigration restrictions. As a professor at the University of California at Davis School of Law, he has worked with students to lobby the repeal of Jim Crow laws still on the books, including anti-Asian land laws in Kansas, New Mexico, and Wyoming. Rose Cuison Villazor is a professor at the University of California at Davis School of Law. She is the author of numerous articles on immigration and citizenship law, equal protection law, and critical race theory, and co-editor of Loving v. Virginia in a Post-Racial World (with Kevin Noble Maillard, Cambridge, 2012) and Asian Americans, Pacific Islanders, and the Law. She has served as an Equal Justice Works Fellow in New York City representing immigrants in a civil rights case. In 2011, she received the Derrick A. Bell Award from the Association of American Law Schools Minority Section.