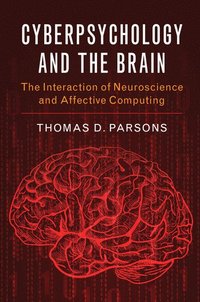 Cyberpsychology and the Brain

The Interaction of Neuroscience and Affective Computing

av Thomas D Parsons
Häftad Engelska, 2017-04-07
379
Köp
Spara som favorit
Skickas inom 7-10 vardagar.
Fri frakt inom Sverige för privatpersoner.
Finns även som
Visa alla 3 format & utgåvor
Cyberpsychology is a relatively new discipline that is growing at an alarming rate. While a number of cyberpsychology-related journals and books have emerged, none directly address the neuroscience behind it. This book proposes a framework for integrating neuroscience and cyberpsychology for the study of social, cognitive, and affective processes, and the neural systems that support them. A brain-based cyberpsychology can be understood as a branch of psychology that studies the neurocognitive, affective, and social aspects of humans interacting with technology, as well as the affective computing aspects of humans interacting with computational devices or systems. As such, a cyberpsychologist working from a brain-based cyberpsychological framework studies both the ways in which persons make use of devices and the neurocognitive processes, motivations, intentions, behavioural outcomes, and effects of online and offline uses of technology. Cyberpsychology and the Brain brings researchers into the vanguard of cyberpsychology and brain research.
Visa hela texten

Bloggat om Cyberpsychology and the Brain

Thomas D. Parsons, Ph.D. is Associate Professor of Psychology at the University of North Texas. He has also served as Assistant Professor and Research Scientist at the University of Southern California's Institute for Creative Technologies. He is a leading scientist in the integration of neuropsychology and simulation technologies. He has directed seventeen funded projects and has been an investigator on an additional thirteen funded projects. In addition to his patents for eHarmony.com's Matching System, he has invented and validated virtual reality-based neuropsychological assessments. He has over two hundred publications, and he has been awarded the National Academy of Neuropsychology's Early Career Achievement Award.