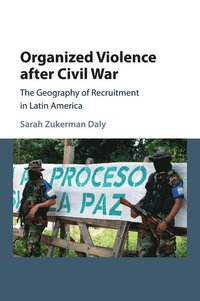 The Geography of Recruitment in Latin America

av Sarah Zukerman Daly
Häftad Engelska, 2017-06-22
339
Köp
Spara som favorit
Skickas inom 10-15 vardagar.
Fri frakt inom Sverige för privatpersoner.
Finns även som
Visa alla 3 format & utgåvor
Nearly half of all countries emerging from civil conflict relapse into war within a few years of signing a peace agreement. The postwar trajectories of armed groups vary from organizational cohesion to dissolution, demilitarization to remilitarization. In Organized Violence after Civil War, Daly analyzes evidence from thirty-seven militia groups in Colombia, demonstrating that the primary driving force behind these changes is the variation in recruitment patterns within, and between, the warring groups. She documents the transition from war to peace through interviews with militia commanders, combatants and victims. Using rich ex-combatant survey data and geo-coded information on violence over fifty years of war, Daly explains the dynamics inside armed organizations and the strategic interactions among them. She also shows how the theory may be used beyond Colombia, both within the region of Latin America and across the rest of the world.
Visa hela texten

'Sarah Zukerman Daly argues that organizational characteristics of armed groups in Colombia strongly affect whether they remilitarize after a peace agreement. Their extensive ties enable members of local groups to remilitarize, but members of non-local groups disperse and lose this capacity. Networks and geography are more important than access to weapons, which is almost universal. Daly's extraordinary fieldwork with extremely violent former group members provides convincing quantitative and qualitative support for this important argument. Organized Violence after Civil War is an extraordinary work of political science.' Robert O. Keohane, Woodrow Wilson School of Public and International Affairs, Princeton University

'This study provides a novel and thoughtful explanation of an important question for societies emerging from warfare - why do some groups silence their guns after agreeing to peace, while others remilitarize and return to violence? The argument highlights the role of the geography of recruitment - whether militant groups recruit and deploy fighters locally or from farther afield. The theory put forth is both parsimonious and subtle, and the empirical evidence adduced for it from the case of paramilitary groups in Colombia is extremely impressive. This book is certainly a must-read for any scholar of Colombia or any scholar of paramilitaries, but it will also find an important audience among scholars interested in the complicated dynamics of civil conflict and the behavior of non-state actors as they navigate the often stormy seas of postconflict transition.' Virginia Page Fortna, Columbia University, New York

'Organized Violence after Civil War explores why some - but not all - armed groups remilitarize after demobilization. Daly argues that the explanation lies in the geography of recruitment - whether the group recruited members from the locale where it was deployed - and in its strategic interaction with other groups after conflict's end. She shows that her theory accounts for why about half of Colombia's three dozen paramilitary groups remobilized, drawing on a wide range of data, from interviews with imprisoned leaders to surveys of demobilized combatants to unpublished government documents. This is an extraordinary achievement based on remarkable field research over several years.' Elisabeth Jean Wood, Yale University, Connecticut

'Civil wars have a strong tendency to recur, yet we know little about why. Drawing on a stunning array of data from extensive fieldwork in Colombia, Sarah Zukerman Daly shows that the geography of armed group recruitment explains why countries at peace slip back into violence. Groups that recruit locally remain cohesive after wars end whereas groups that recruit outside their own region wither away as their members depart. Regions comprised of locally based groups thus maintain a stable and peaceful balance of power, whereas regions where local groups neighbor non-local groups b...

Sarah Zukerman Daly joined the University of Notre Dame faculty in 2013 as Assistant Professor in Political Science after receiving her Ph.D.in the subject from Massachusetts Institute of Technology. Her doctoral dissertation received the 2011 Lucian Pye Award for the Best Dissertation in Political Science from the Massachusetts Institute of Technology. Her research interests lie in the fields of civil war, peace processes, international security, and ethnic politics with a regional focus on Latin America. Daly has served as a fellow in the Political Science Department and at the Center for International Security and Cooperation at Stanford University, California, at the Saltzman Institute of War and Peace Studies at Columbia University, New York, and at the Belfer Center for Science and International Affairs at Harvard University, Massachusetts.

1. Introduction - a farewell to arms?; 2. Theory of the postwar trajectories of armed organizations; 3. Violence and peace in Colombia; 4. Geography of recruitment and postwar organizational capacity; 5. Strategic interactions between armed groups and remilitarization; 6. The path to demilitarization: configuration of local militias in Antioquia; 7. Remilitarization, strong and weak: local and non-local militias in Catatumbo and Urab/Crdoba; 8. Beyond Colombia: transitions from war to peace in comparative perspective; 9. Conclusion.