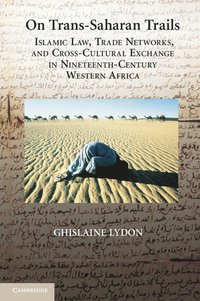 av Ghislaine Lydon
Häftad Engelska, 2012-08-13
287
Köp
Spara som favorit
Skickas inom 7-10 vardagar.
Gratis frakt inom Sverige över 159 kr för privatpersoner.
Finns även som
Visa alla 2 format & utgåvor
This study is the first of its kind to examine the history and organization of trans-Saharan trade in western Africa using original source material. It documents the internal dynamics of a trade network system based on a case study of 'Berber' traders from the Wd Nn region, who specialized in outfitting camel caravans in the nineteenth century. Through an examination of contracts, correspondence, fatwas and interviews with retired caravaners, Professor Lydon shows how traders used their literacy skills in Arabic and how they had recourse to experts of Islamic law to regulate their long-distance transactions. The book also examines the strategies devised by women to participate in caravan trade. By embracing a continental approach, this study bridges the divide between West African and North African studies. The work will be of interest to historians of Africa, the Middle East, and the world and to scholars of long-distance trade, Muslim societies and Islamic law.
Visa hela texten

'Lydon's lengthy book provides a wealth of information about trans-Saharan trade on the eve of colonial conquest and will serve as a benchmark. ... Lydon's arguments are provocative contributions to evolving debates on Islamic economies and economic anthropology.' The Journal of Comparative Studies in Society and History

'Lydon successfully reconciles the rich variety in written and oral sources on the trans-Saharan trade ... The book is refreshing for its exploration of lightly trodden trans-Saharan tracks.' The Journal of African History

'In this massive study [Lydon] tries, with considerable success, to do it all: Saharan trade is integrated into the story of global/cross-cultural exchange; the traditional divisions of 'North' and 'West' African history are repositioned by a focus on the Saharan commerce that unites them; and a remarkably lucid tale is told of Wad Nun (southern Moroccan) economic (and social, and legal) links in the nineteenth century, south through Tawdenni and Arawan to Timbuktu, then back north through Walata, Tishit, Shinqit (with a brief excursion to the coast at Arguin), Wadan, and Ijil. ... We are indebted to Ghislaine Lydon for bringing all this and much, much more together, effectively opening research arenas that formerly were foggily defined, at best, and spelling out methodologies frequently ignored by Africanist blinders. But most of all, she has reaffirmed the importance of our attention to the tens of thousands of manuscripts, now increasingly accessible and known, across the Sahara and West Africa.' Charles C. Stewart, Islamic Africa

'In this pioneering work, Lydon has given historians and legal scholars a window into the commercial complexities of trans-Saharan trade that reached across vast distances and multiple currency zones ... On Trans-Saharan Trails makes an important contribution to African history and by extension to world history.' Law and History Review

Dr Ghislaine Lydon is an Associate Professor in the Department of History at the University of California, Los Angeles. The author of several articles on West Africa, she has done extensive fieldwork in both West and North Africa and archival work in France.

1. Making history across the African divide; 2. Trans-Saharan trade in the longue dure; 3. Markets and the movement of caravans: nineteenth-century developments; 4. Guelmm and the Wd Nn traders; 5. The organization of caravan trade; 6. Business practice and legal culture in a paper economy of faith; 7. Trade networks and the limits of cooperative behavior; 8. On trans-Saharan trails.