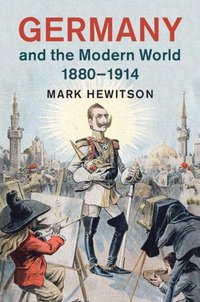 av Mark Hewitson
Häftad Engelska, 2018-07-05
309
Köp
Spara som favorit
Skickas inom 10-15 vardagar.
Fri frakt inom Sverige för privatpersoner.
Finns även som
Visa alla 2 format & utgåvor
The German Empire before 1914 had the fastest growing economy in Europe and was the strongest military power in the world. Yet it appeared, from a reading of many contemporaries' accounts, to be lagging behind other nation-states and to be losing the race to divide up the rest of the globe. This book is an ambitious re-assessment of how Wilhelmine Germans conceived of themselves and the German Empire's place in the world in the lead-up to the First World War. Mark Hewitson re-examines the varying forms of national identification, allegiance and politics following the creation and consolidation of a German nation-state in light of contemporary debates about modernity, race, industrialization, colonialism and military power. Despite the new claims being made for the importance of empire to Germany's development, he reveals that the majority of transnational networks and contemporaries' interactions and horizons remained intra-European or transatlantic rather than truly global.
Visa hela texten

'In Germany and the Modern World, 1880-1914 Mark Hewitson develops an astutely measured, non-polemical appraisal of the concept of the 'globalized nation' on the eve of the First World War, setting the irreducible Europeanness of Germany's dynamism beside and against the wider overseas expansionism. An authoritative, timely and beautifully executed intervention.' Geoff Eley, University of Michigan

'This is simply an impressive contribution by Mark Hewitson. The book makes a timely, crucial and critical contribution to the German Empire and its interwoven relationships within Europe and beyond in a globalizing world around 1900.' Bernhard Struck, University of St Andrews

'This is a welcome historical analysis of German national identity in the era before the First World War, during what is often called the 'first global age'. The study, which challenges many of the claims made about the impact of globalization, is certain to provoke reflection and controversy.' Roger Chickering, Georgetown University, Washington DC

Introduction: nation, empire, globe; 1. Colonial fantasies and imperialism; 2. Germany looks to the West (and the East); 3. Nationalism and racism; 4. Europe and the crisis of the German state; 5. Weltwirtschaft: industrialization and national competition; 6. A world of enemies? Global empires and European powers; Conclusion: around the world in eighty days.