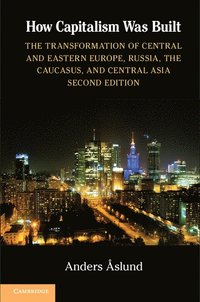 How Capitalism Was Built

The Transformation of Central and Eastern Europe, Russia, the Caucasus, and Central Asia

av Anders Aslund
Häftad Engelska, 2012-11-12
349
Köp
Spara som favorit
Finns även som
Visa alla 3 format & utgåvor
Anders Aslund is known to make bold predictions that initially arouse controversy but soon become common wisdom. In Gorbachev's Struggle for Economic Reform (1989), he foresaw the collapse of the Soviet political and economic system. After Russia's financial crisis of 1998, observers declared the market economic experiment a failure, Aslund foresaw market economic success (Building Capitalism, 2002). In How Capitalism Was Built, 2nd Edition, he asks - and answers for the twenty-one countries he investigates: Why did communism collapse? Why did Russia not choose gradual reforms like China did? Wherein lies the relative success of postcommunist transformation? How did the oligarchs arise and decline vis-...-vis authoritarian leaders? Anyone who wants to understand the often confusing postcommunist dramas and obtain an early insight into the future will find this intellectually stimulating book useful. This edition includes updates to each chapter and new chapters on the impact of the global financial crisis and the European Union.
Visa hela texten

'How Capitalism Was Built is an impressive achievement. It deals with all the important aspects of one of the most important transformations in modern history. It is based on a massive empirical literature and - what's rare - on an author's firsthand knowledge of the transition countries. It should be read by everybody interested in modern history, politics, and economics.' Leszek Balcerowicz, College of Europe and Former Chairman, National Bank of Poland

'This book is a heroic attempt to cover the whole of transition from the former Soviet Union and Central, Eastern, and Southern Europe to the Baltics. Anders slund is able to cover this vast territory in a substantive way by grouping the transition experiences in a clear and logical manner. It is a timely publication.' Paul Gregory, University of Houston

'Anders slund has followed post-communist transitions from the outset, and he has got it right. Few economists have seriously studied the transformation of post-communist economies, or more poetically, how aquaria have been restored from fish soup. slund has. One of his main conclusions is that early, comprehensive, and radical market economic reforms worked best, and as he rightly points out, Estonia is the best proof that such policies work.' Toomas Hendrik Ilves, President of the Republic of Estonia

'Anders slund has repeatedly challenged conventional wisdom. He was right about Gorbachev's reforms, right about Yeltsin, and right about the more recent resurgence of Russia. Anyone who cares about the former Soviet Union, emerging markets, global energy security, and the progress of democracy ignores slund and this book at their own peril.' Simon Johnson, Massachusetts Institute of Technology

'For more than twenty years, Anders slund has been the most perceptive and knowledgeable chronicler of the creation of capitalism in Eastern Europe and the former Soviet Union. His excellent judgment and wisdom shine through every page of this volume.' Andrei Shleifer, Harvard University

'Anders slund is the world's keenest observer of what used to be called 'transition economies'. Everyone concerned with the historical lesson these economies provide or their future should read this important book.' Lawrence Summers, Former US Secretary of the Treasury and Former President, Harvard University

Anders Aslund is a leading specialist on postcommunist economic transformation with more than 35 years of experience in the field. The author of eleven books, he has also worked as an economic advisor to the Russian, Ukrainian and Kyrgyz governments. Dr Aslund joined the Peterson Institute for International Economics in Washington DC as a senior fellow in 2006. Before that he was the Director of the Russian and Eurasian Program at the Carnegie Endowment for International Peace. He teaches at Georgetown University. He earned his PhD from Oxford University. He was born in Sweden and served as a Swedish diplomat.

Introduction: a world transformed; 1. Communism and its demise; 2. Radical reform versus gradualism; 3. Output: from slump to recovery and boom; 4. Liberalization: the creation of a market economy; 5. From hyperinflation to financial stability; 6. Privatization: the establishment of private property rights; 7. The social system; 8. The politics of transition; 9. From crime toward law; 10. The importance of the European Union; 11. The global financial crisis, 2007-12; Conclusions: a world transformed.