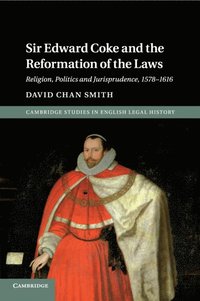 Sir Edward Coke and the Reformation of the Laws

av David Chan Smith
Häftad Engelska, 2019-10-17
299
Köp
Spara som favorit
Skickas inom 10-15 vardagar.
Fri frakt inom Sverige för privatpersoner.
Finns även som
Visa alla 3 format & utgåvor
Throughout his early career, Sir Edward Coke joined many of his contemporaries in his concern about the uncertainty of the common law. Coke attributed this uncertainty to the ignorance and entrepreneurship of practitioners, litigants, and other users of legal power whose actions eroded confidence in the law. Working to limit their behaviours, Coke also simultaneously sought to strengthen royal authority and the Reformation settlement. Yet the tensions in his thought led him into conflict with James I, who had accepted many of the criticisms of the common law. Sir Edward Coke and the Reformation of the Laws reframes the origins of Coke's legal thought within the context of law reform and provides a new interpretation of his early career, the development of his legal thought, and the path from royalism to opposition in the turbulent decades leading up to the English civil wars.
Visa hela texten

'Smith has presented a highly influential volume on Edward Coke's jurisprudence up to the time of his dismissal by King James I from the Court of King's Bench. His knowledge of Coke's writings and jurisprudence, based on his use of both manuscript and published primary sources, will make this work a definitive study of Coke's early life. This book is recommended for all collections of English legal history.' Joel Fishman, Law Library Journal

'Smith's book is notable for its careful and wide-ranging reading of sources. His scholarship is as impressive as his erudition. This is complex and often bewildering material and his explication of individual cases and his ability to synthesize contemporary ideas is admirable. ... This is, in sum, a fine work of scholarship that is both accessible and informative. It makes an important contribution to the field.' James S. Hart, Jr, The American Historical Review

'For students and scholars of legal history with at best only a passing interest in Coke, the real value of the book lies in its nature as a case study that illustrates a much deeper challenge to a number of interpretive angles that have tended to govern debates in English political history. Refreshingly, Smith's argument defies the binary terms of liberty and royal prerogative that have structured so many readings of English legal and constitutional history.' Sebastian Sobecki, Journal of BritishStudies

Bloggat om Sir Edward Coke and the Reformation of th...

David Chan Smith is an Assistant Professor of History at Wilfrid Laurier University, Ontario, where he researches business and law in the early modern Atlantic world.

1. Introduction; 2. Uncertainty and the reformation of the laws; 3. 'The most dangerous oppressor': the misuse of the law; 4. Confidence and corruption: the law in the Fens; 5. Identity and narratives of the past; 6. Reason and reform; 7. Pragmatism and the High Commission; 8. Chancery, reform, and the limits of cooperation; 9. Delegation and moral kingship; 10. Conclusion.