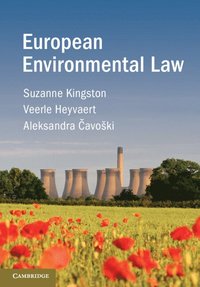 av Suzanne Kingston
Häftad Engelska, 2017-07-20
449
Köp
Spara som favorit
Finns även som
Visa alla 3 format & utgåvor
EU Environmental Law is a critical, comprehensive and engaging account of the essential and emerging issues in European environmental law and regulation today. Suitable for advanced undergraduate and postgraduate students, the book delivers a thematic and contextual treatment of the subject for those taking courses in environmental law, environmental studies, regulation and public policy, and government and international relations. Placing the key issues in context, EU Environmental Law takes an interdisciplinary and thematic approach to help students to better understand the implementation and enforcement of environmental law and policy across Europe. It offers an accessible overview, and links theory with practical applications that will allow students to contextualise the outcomes of legal rules and their impact on public and private behaviours. It provides a definitive account of the subject, examining traditional topics such as nature conservation law, waste law and water law, alongside increasingly important fields such as the law of climate change, environmental human rights law, and regulation of GMOs and nanotechnology.
Visa hela texten

'This essential text for students of EU environmental law locates substantive and increasingly vital areas of the law, ranging from climate change to nature conservation, in a highly contextual setting centred on the governance of law and science. By providing a nicely weighted backdrop of the actors and institutions at play in EU environmental law and the principles which influence their action, the text is able to provide compelling and critical accounts of both procedural and substantive rights and issues at the heart of environmental protection in the European Union.' Robert Lee, Birmingham University

'This is a major contribution to the literature in terms of clarity, scope and analytical depth. It will certainly be an important resource for academics and practitioners working in the field. At a time when many have lost sight of the value of EU law, this book reminds us of the reach and sophistication of EU environmental law, which the rest of the world sees as a model.' Jorge E. Viuales, University of Cambridge

Suzanne Kingston is Professor of Law at University College Dublin and Barrister-at-Law practicing at the Irish Bar, appearing regularly before the Irish and European courts. She served as a rfrendaire (legal advisor) in the cabinet of Advocate General Geelhoed at the European Court of Justice, Luxembourg from 2004 to 2006, and has been international visiting professor of law at Columbia Law School, New York. Veerle Heyvaert is Associate Professor of Law (Reader) at the London School of Economics and Political Science where she teaches and publishes on environmental law. Founding Editor-in-Chief of Transnational Environmental Law, she has worked as an attorney in Brussels and was Moragoda Professor of Public International Law (Sri Lanka, 2015), Sir Peter North Fellow at the Oxford Centre for Socio-Legal Studies and Keble College, Oxford, and a UNITAR Special Fellow. Aleksandra avoki has over ten years of experience teaching in civil and common law jurisdictions, and currently lectures at the University of Birmingham. She was a key contributor to the development of EU legal studies in Serbia, in particular EU environmental studies, as the country began the EU accession process, and publishes on environmental law issues in both English and Serbian.