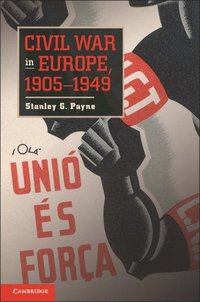 av Stanley G Payne
Häftad Engelska, 2011-09-30
240
Köp
Spara som favorit
Fåtal ex i lager. Skickas inom 1-2 vardagar.
Fri frakt inom Sverige för privatpersoner.
Finns även som
Visa alla 3 format & utgåvor
This is the first account in any language of the civil wars in Europe during the era of the world wars, from 1905 to 1949. It treats the initial confrontations in the decade before World War I, the confusing concept of 'European civil war,' the impact of the world wars, the relation between revolution and civil war and all the individual cases of civil war, with special attention to Russia and Spain. The civil wars of this era are compared and contrasted with earlier internal conflicts, with particular attention to the factors that made this era a time of unusually violent domestic contests, as well as those that brought it to an end. The major political, ideological and social influences are all treated, with a special focus on violence against civilians.
Visa hela texten

"Stanley Payne's excellent book treats, for the first time in one volume, the rise and spread of civil war in Europe during the first half of the twentieth century. Through a careful and brilliant comparison of internal conflict from Turkey to Russia to Spain and beyond, Payne is able to shed light on the causes and consequences of this form of warfare in general. Since civil wars have come to dominate modern armed conflict, this book is ideal for students, scholars, and intelligent readers interested in military history or current wars around the world." -Mary Habeck, Johns Hopkins University

"Stanley Payne's Civil War in Europe, 1905-1949 offers a remarkable comparative historical synthesis about a profoundly important topic. Payne examines the civil wars in Russia, Spain, political violence in Italy and Germany in the periods before and during Fascism and Nazism, the 'parallel wars' that took place in the midst of World War II, and the civil wars in Greece and Yugoslavia. In each instance, one of the world's leading historians of twentieth century Spain and of comparative fascism draws on classic and recent scholarship to offer many fresh insights about the similarities and differences of that famous civil war to others less often viewed through that prism. As he notes, by the end of the twentieth century, civil war had become the dominant form of violent conflict around the world. This important and excellent work rests on years of deep learning and fine honed judgment. It deserves a wide audience in the universities, in an informed general audience as well as in government office and think tanks that address the existence of civil wars in our own time." -Jeffrey Herf, University of Maryland

"This is an outstanding and very readable book on European civil wars in the 20th century. Like other works by Stanley Payne, it is based on his unique knowledge of European countries' history and on an almost exhaustive and up-to-date bibliography. It is full of insights and comparisons that contribute to our understanding. The section on the Spanish Civil War and its causes is particularly interesting. The presentation and analysis of the perspectives, considerations and policies of the French and British governments and of Hitler and Mussolini at different points in time of the war is a very original contribution. This work is likely to have a broad audience not only of historians and political scientists but of educated readers." -Juan J. Linz, Yale University

"A masterful synthesis which, for the first time, explores the many civil wars of the most violent period of European history. Only a handful of scholars can match Stanley Payne's knowledge and analytical abilities." -Michael Seidman, University of North Carolina Wilmington

Stanley Payne has taught history in several universities, including Columbia University, UCLA and the University of Wisconsin. He is a member of the American Academy of Arts and Sciences and a corresponding member of Real Academia Espaola de la Historia, Madrid. He has received various awards and prizes, most recently the Marshal Shulman Book Award of the American Association for the Advancement of Slavic Studies (2005) and the Gran Cruz de Isabel la Catlica from the Spanish government (2009). He has been co-editor of the Journal of Contemporary History since 1999. Professor Payne is the author of some twenty books and many articles, as well as other edited, co-edited and co-authored books. Most recently, he is the author of The Collapse of the Spanish Republic, 1933-1936: Origins of the Civil War; Franco and Hitler and Spain: A Unique History.