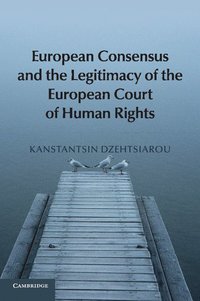 av Kanstantsin Dzehtsiarou
Häftad Engelska, 2016-10-06
289
Köp
Spara som favorit
Skickas inom 7-10 vardagar.
Gratis frakt inom Sverige över 159 kr för privatpersoner.
Finns även som
Visa alla 3 format & utgåvor
In order to be effective, international tribunals should be perceived as legitimate adjudicators. European Consensus and the Legitimacy of the European Court of Human Rights provides in-depth analyses on whether European consensus is capable of enhancing the legitimacy of the European Court of Human Rights (ECtHR). Focusing on the method and value of European consensus, it examines the practicalities of consensus identification and application and discusses whether State-counting is appropriate in human rights adjudication. With over 30 interviews from judges of the ECtHR and qualitative analyses of the case law, this book gives readers access to firsthand and up-to-date information, and provides an understanding of how the European Court of Human Rights in Strasbourg interprets the European Convention on Human Rights.
Visa hela texten

'Kanstantsin Dzehtsiarou's book presents the first comprehensive treatise of consensus as used by the European Court of Human Rights ... Dzehtsiarou deserves praise for this book. It discusses comprehensively a question hitherto often overlooked and opens up novel insights into 'all things consensus'. The combination of socio-legal method with the doctrinal method work[s] exceptionally well and should encourage future research along these lines.' Tobias Lock, Human Rights Law Review

'The book is thoroughly researched, it presents its core ideas with lucidity and, most importantly, it takes a very clear stance in favour of a rather controversial method of interpretation, used as it is in the highly sensitive and politicized area of human rights law in Europe ... In short, this book is a major achievement in the study of this important subject.' Vassilis Tzevelekos and Panos Kapotas, Common Market Law Review

'Dzehtsiarou's analysis of The Court's use of a European consensus argument to generate legitimacy is well-balanced in terms of presenting both supporting and dissenting arguments. He confronts anti-majoritarians head on, arguing for example that the normative grounding of the European consensus idea in majoritarian logic has not prevented The Court from deploting it in defense of a wide range of minority groups - religious, ethnic, and linguistic.' Stephen C. Ropp, Human Rights Review

Kanstantsin Dzehtsiarou is a senior lecturer in law at the University of Surrey and a visiting professor at the European Humanities University in Vilnius, Lithuania.