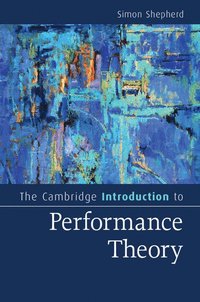 The Cambridge Introduction to Performance Theory

av Simon Shepherd
Häftad Engelska, 2016-03-15
239
Köp
Spara som favorit
Skickas inom 7-10 vardagar.
Fri frakt inom Sverige för privatpersoner.
Finns även som
Visa alla 3 format & utgåvor
What does 'performance theory' really mean and why has it become so important across such a large number of disciplines, from art history to religious studies and architecture to geography? In this introduction Simon Shepherd explains the origins of performance theory, defines the terms and practices within the field and provides new insights into performance's wide range of definitions and uses. Offering an overview of the key figures, their theories and their impact, Shepherd provides a fresh approach to figures including Erving Goffman and Richard Schechner and ideas such as radical art practice, performance studies, radical scenarism and performativity. Essential reading for students, scholars and enthusiasts, this engaging account travels from universities into the streets and back again to examine performance in the context of political activists and teachers, countercultural experiments and feminist challenges, and ceremonies and demonstrations.
Visa hela texten

Simon Shepherd is Professor Emeritus of Theatre at the Royal Central School of Speech and Drama, University of London. He has written on performance, theatre and culture for over thirty years and his books include Direction (2012), The Cambridge Introduction to Modern British Theatre (Cambridge, 2010), Drama/Theatre/Performance (with Mick Wallis, 2004), Studying Plays (with Mick Wallis, 1998) and English Drama: A Cultural History (with Peter Womack, 1996).